WATCH: Squatters chased out by armed men in Spain’s Murcia 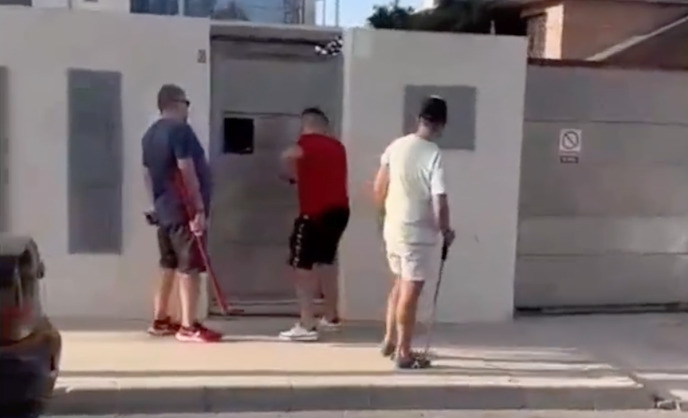 A VIDEO circulating on social media shows three men armed with sticks entering a property in El Esparragal (Murcia) and forcing squatters out of the house.

The viral video from Murcia’s district of El Esparragal shows the squatters ‘being evicted’ by the three men.

One of the men, Victor, was returning home from the beach with his wife and daughter, however, when he tried to enter his house his key would not fit the lock.

Retelling his story to Spain’s Antena 3, Victor said his wife and daughter were crying so he decided to take matters into his own hands.

After leaving them at a relative’s house, Victor went in search of two friends to get the squatters out of his house.

Victor, accompanied by his two friends, entered the house and forced the squatters out.

He revealed that this wasn’t the first time he has had to battle squatters after revealing that he “already knows about the consequences of a squat of this kind.”

“I have spent five years fighting to get squatters out of a family home”.

However, he admitted that he probably shouldn’t have entered the property in the manner he did.

“It’s not right how we acted. Entering by intimidating. The squatters were not cooperative at first, but then they were. We let them pick up their belongings, they picked up everything and left on their own.”

He also said that he regretted that there were children in the house.

“The partner told them to go outside to wait for the adults. Before that child cried my child cried too and if someone has to cry it should be the squatter and not the owner. The squatter has all the rights and the owners have none,” he said.

The video made the rounds on social media and drew hundreds of comments.

One person on Twitter wrote: “When your government does not protect you, when the laws of your country do not protect you and when you have to decide between protecting your family or going to sleep under a bridge with your children because some squatters have ruined your life.”

Another person wrote: “BRAVO! We have to lose the fear of RECOVERING WHAT IS OURS.”

“It is totally a joke, that a person for defending his property, since justice does not act and does the job that the police have to do, has to pay consequences,” said another person.

While another person wrote: “The devastating phrase that should be internalised in this country is “if there is someone who has to cry, let it be the squatter and not the owner” and that is how it should be with everything, whoever commits a crime, should assume the consequences but especially the sentence.”

“If everyone did the same to recover their home, the courts would not give enough… I’ll leave it there… And the law will change,” wrote another.

The squatter problem in Murcia comes after the home of an ex-pat in Benijofar was besieged by a group who installed an alarm to keep her out.

On August 9, German national Renata de la Plaza told the Euro Weekly News she and her husband bought the property in the Monte Azul housing estate 30 years ago but squatters have since moved in and she is struggling to get help from either the police or the town hall, as she claims she is currently battling over changing the name on the property´s paperwork.