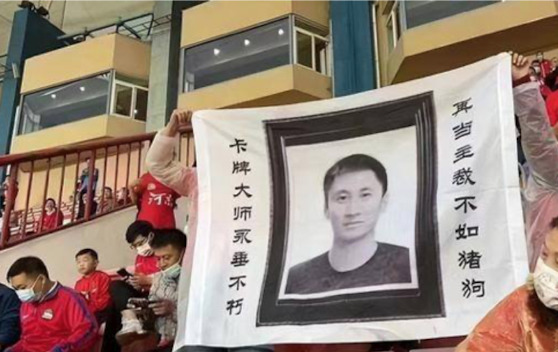 A CHINESE football club has been forced to issue an apology after supporters hung a funeral-like banner of a referee who sent off one of their players in a previous game.

The actions of Henan Songshan Longmen supporters, who held the banner of the referee, were condemned by fans, commentators and the country’s football federation.

A funeral-like portrait of referee Ma Ning was held up by supporters during a recent game against Guangzhou FC.

The reaction from fans of Henan Songshan Longmen is believed to have been in retaliation to Ma Ning sending off Henrique Dourado earlier this month.

Dourado was suspended for 12 months by the Disciplinary Committee of the Chinese Football Association for violent acts against the referee Ma Ning in the match against the Wuhan Yangtze River team.

One Twitter user shared a GIF of the red card incident.

That's how the red card came from. pic.twitter.com/FwgsLyANfN

During the match against Guangzhou FC on August 28, commentator Yuan Jia is said to have reacted angrily after the banner of Ma Ning appeared on the screen.

He was heard saying, “they’ve gone too far…they’re hooligans, not proper fans.”

Since the backlash over the incident, Henan Songshan Longmen has issued an apology.

“The Henan Football Association strongly condemns this insulting behaviour carried out by individual fans, expresses sincere apologies for the adverse effects caused by this, and sincerely expresses its sincere sympathy for the injury to the parties involved.

“I apologise for the inadequacy of my own work and will correct it in a timely manner.

“I sincerely accept the criticism and supervision from all walks of life. I hope everyone can cherish the hard-won situation of the Chinese Super League, jointly maintain the good image of the Henan Division, and jointly create a positive and progressive ‘Gold Medal Market’.”

The club said that because it was raining during the game, raincoats worn by the fans made it harder to do the necessary security checks.

“Although the club’s watch supervisor discovered the illegal banner immediately and actively cooperated with the police on duty to dispose of it, it has already caused adverse effects. My club deeply regrets it.”

Fans reacted to the apology from the club.

“As expected of Ataoka China quality, which does not distinguish between what is right and wrong to do (laughter),” one person said.

“I have a feeling that China will do whatever it pleases,” another person wrote.

While another said: “They’re like the Hashimoto Home, which was sued for issuing an insult certificate.”