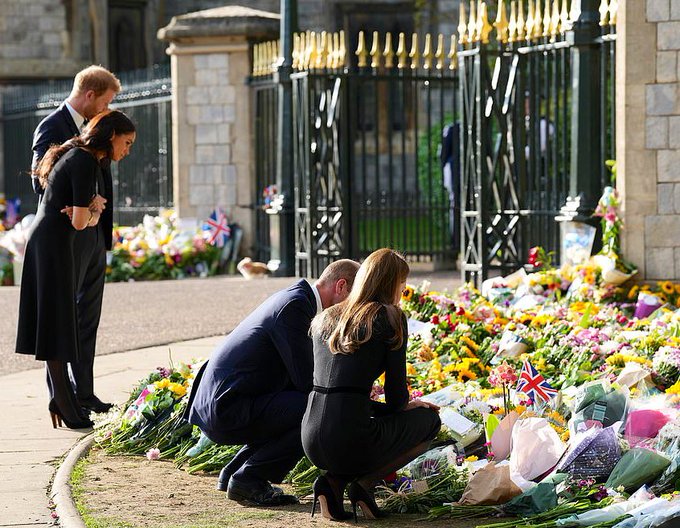 10:16 (September 11) – The Queen got her dying wish with her grandsons seemingly mending their relationship.

Prince William and Prince Harry, accompanied by their wives, took to the streets in a very public show of affection and brotherhood.

The pair took time out to view the tributes paid to their grandmother and to meet with well-wishers, along with other members of the family. King Charles had said that his mother had always seen the best in people and that she would have wanted to see the brothers and the family reunited.

Certainly, their mother Princess Diana would have been most proud to see her two boys doing what she taught them so well, to be respectful, honourable and regal.

The body language from the two princesses was, however, a little more revealing. Clearly, there is some way to go before their relationship is normalised, with many things said in the heat of the moment that Megan will now regret and which may require her to shelve her pride in making things right.

Royalists will hope that this is much more than just a show of joint grief, but rather a genuine burying of the hatchet.

9:27 (September 9) – Prince Harry has left Balmoral Castle as he arrived, alone accompanied only by his security team.

Seen leaving the castle shortly after 8:30 am on Friday, September 9 his leaving alone and so early, suggests that the Queen’s death has yet to result in family feuds being settled.

Prince Harry’s wife and their children did not accompany him to Balmoral where by all accounts he and other family members arrived too late to see her pass away.

His leaving in this manner is a bad sign for those royalists who had hoped the sad passing of his grandmother would go a long way in healing family rifts. However, the announcement that Camilla has been named as Queen Consort will do little to help.

Prince Harry had said recently that he would never accept Camilla in the role.

The death of his grandmother will also bring back bad memories of the death of his own mother and the scandals that surrounded her separation from his father and her resulting isolation.

Prince Harry finds himself in the difficult situation of having to put those unhappy memories behind him, if he is to heal the rifts between himself, his brother Prince William and the man who is now King, his father.

Royalists will look to the next sign of whether there has been any warming in the relationship within the family when they next appear in public to mourn the death of Queen Elizabeth.

With her funeral only nine days away we will soon have an answer whether the family can come together in this difficult time, particularly with Prince Harry seen leaving Balmoral Castle early and on his own.