The Euesden’s charity work: In aid of Children with Cancer UK 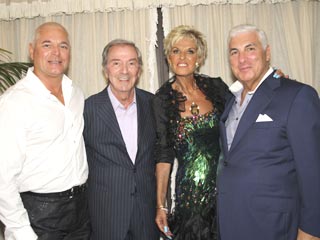 Image - The Euesdens with Des O'Connor and Mitch Whinehouse

Michel and Steven Euesden are the couple responsible for founding the Euro Weekly Newspaper, now the biggest expat newspaper in all of Spain. Not only are they straight-talking, entrepreneurial businessmen, but their charity work shows that their hearts are as big as their ideas.

It is because of their generosity and compassion that throughout their ever-expanding careers they have always placed a focus on charity work whenever they can, only requesting complete transparency regarding the funds raised in exchange for their social-justice work.

Furthermore, as the majority of money raised comes in the form of kind donations from those residing on Spain’s coasts, even despite the ongoing economic crisis, Michel and Steven have maintained their policy that all of the money donated goes towards the worthy cause and is never abused by excessive expense claims.

One of the charity projects Michel and Steven are most proud of is the work they’ve done in aid of Children with Cancer UK, supporting a Special Summer party in 2016 to fundraise for the important cause. The event, held at Villa Tiberio in Marbella, was a great success and has been considered one of the biggest events of the season along the Costa.

The event was a showbiz spectacular, with well-known names such as Frankie Valentine, Des O’Connor, Mitch Whinehouse and Hannah Paul joining the celebrations to give fabulous performances and mingle with the crowd. Whinehouse also graciously donated a portion of his daughter’s vast CD collection to the cause.

As well as these star-studded names, guests were also treated to live performances by Julie Atherton and Charlotte Wakefield (who played Maria in the Sound of Music) who had both sacrificed a day from their London stage careers to contribute to the fundraiser event.

Also present was the founder of in aid of Children with Cancer UK John O’Gorman, who lost both his children within nine months of each other. He, along with other representatives of the charity, attended to explain why he had founded such an important organisation. He also reminded the audience of how important the work they do is, in association with Great Ormond Street Hospital in London, improving the chances of recovery for children with cancer.

Thanks to the raffle and auction that was held, as well as the more than 200 tickets that were sold for the event, more than €30,000 was raised in aid of Children with Cancer UK over the course of the evening.

Caroline Randerson, an organiser for the UK based charity, expressed her astonishment and gratitude at the scale and success of the event. “This year we sold double the usual number of tickets. We have never managed to sell out before. This year was the seventh edition of the event and it was a brilliant night. A special thank you has to go to everyone who helped to make it such a superb evening from Sandro, Dee and the staff at Villa Tiberio, right up to the people who made the effort to travel from the UK especially to perform for the night. And, of course the Euro Weekly News has been incredible. We couldn’t have done it without their support.”