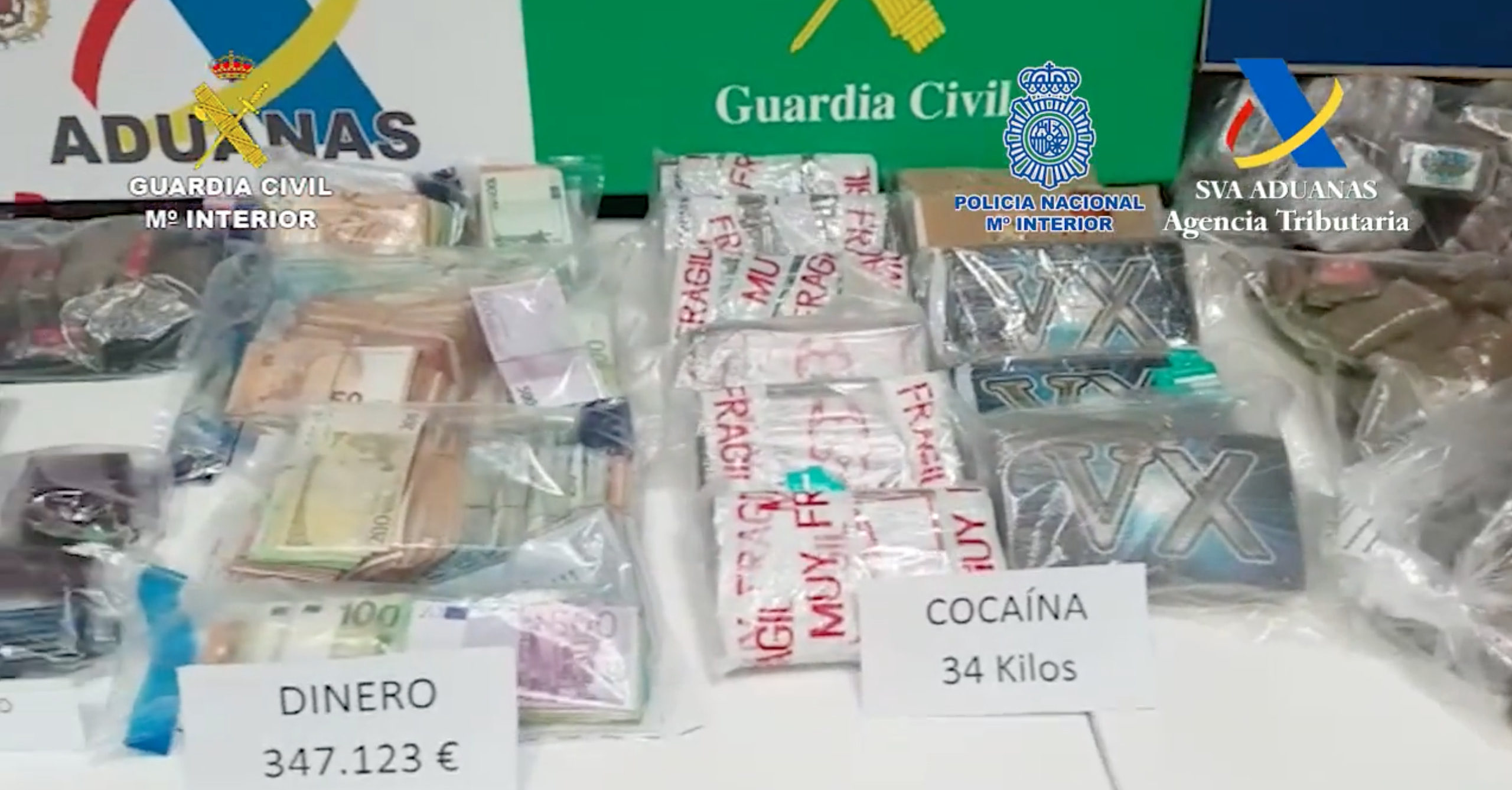 A massive drug bust was carried out by a joint operation including the Guardia Civil, the Spanish National Police and the Tax Agency, that saw a criminal organisation dedicated to importing large consignments of drugs from abroad through Spanish ports dismantled.

Video footage of the drug bust at various Spanish ports was shared on Twitter:

The operation, which took place in Madrid and on the island of Ibiza, has resulted in the arrest of 42 people.

In addition, 32 entries and searches were carried out, in which 47 kilograms of cocaine, 143 kilograms of hashish, 46 kilograms of marijuana, 38 kilograms of buds, 347,000 euros in cash, as well as different quantities of ecstasy and other synthetic drugs, in addition to heroin and cutting substances were seized.

The operation began last year, when the police forces were carrying out independent operations against drug trafficking, which came together in the same operation.

In this investigation, it was determined that it was a criminal network operating in Madrid and Ibiza, with all the members being interrelated.

The modus operandi consisted of importing large quantities of narcotic substances from abroad through Spanish ports.

Once on Spanish territory, the drugs were transported to Madrid, from where they were redirected to the island of Ibiza, using “caleteado” vehicles, as well as parcel deliveries with false affiliations.

In order to carry out their criminal activities, the alleged perpetrators had at their disposal numerous warehouses, villas, flats and storage rooms, which contained large plantations of marijuana, large amounts of money and other types of narcotic substances.

The operation has been divided into several phases. Firstly, in August last year, a large package was intercepted on its entry to the island of Ibiza, containing seven kilograms of cocaine, 35 kilograms of hashish and 12 kilograms of marijuana.

As a result of the coordination between police forces, it was possible to determine the route of the narcotic substance.

On the one hand, there was the entry through ports such as Algeciras, where shipments of cocaine hidden in pineapples have been seized, and on the other hand, the local production of other substances, such as marijuana and hashish.

Continuing with the investigation, a new seizure of narcotic substances was made at the beginning of last month, involving 13 kilograms of cocaine hidden in a vehicle with a double bottom when it entered Ibiza by ferry from Madrid.

The latest intervention, on August 24, involved the search of 17 homes in Madrid, with the arrest of 16 people.

Large quantities of drugs of all kinds were seized, such as: 10 kilograms of cocaine, 35 kilograms of hashish, three marijuana plantations.

On the island of Ibiza, the searches were carried out in the towns of Ibiza and San José, and 26 people were arrested.

In the 15 searches carried out, three marijuana plantations with 1,000 plants were dismantled and 18 kilos of dried buds were seized.

In addition, 10 drug sales points were dismantled, from which various quantities of cocaine, hashish, ecstasy, pink cocaine and other designer drugs were seized.

A further 11 vehicles and 178,000 euros in cash were seized. In this same operation, 31 kilos of cocaine, 35 kilos of hashish and 20 kilos of marijuana buds were also seized in previous weeks when they were going to be introduced into the Balearic Archipelago.

The news comes after Spain’s Guardia Civil issued a warning for a “suitcase at the airport” scam which has seen an increase in cases in the province of Almeria, as reported on Wednesday, August 24.