Michel Euesden: Her fight through failures and hardships to become the woman she is today 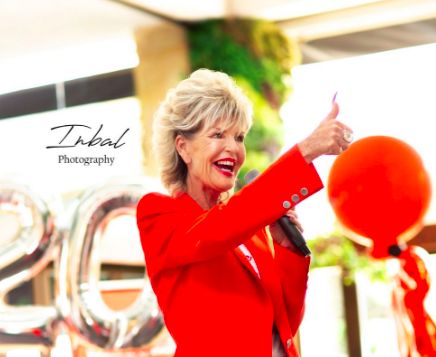 In her own words, Michel says that she began her journey by being “the most defined, focused, positive person you could ever meet”. However, she acknowledges that in order to get where she is today, she’s had to go through failures and hardships.

Building her life in Fuengirola and building such a successful media outlet and news source has certainly not been plain sailing for the Euesdens. Although they say the success has made all the hard work, working all hours 7 days a week, worth it, they’ve each had their own struggles along the way as well to deal with together.

In a speech that Michel delivered at Costa Women’s seventh International Women’s Day conference, she spoke about being a confident young woman, reminiscing that “youth is a great thing”. Especially for women, who later down the line have to deal with menopause, and make their husbands deal with their mood swings and grouchiness as well!

In her speech, she jokes about the other things women have to deal with, realising that as her son grew up, “Mom” came to stand for “Made of Money”, as her son would ask for money for a deposit or for a night out. In her witty patter, she goes on to joke that then her son reproduced, and now she’s a Grandma who is expected to be a house keeper, “inbuilt baby sitter”, and “bank of mom”

At the event she had the crowd in tears, talking about being a woman and having to cope with “saggy boobs, loss of libido, this fast guy that you don’t recognise anymore” (a joke for the husbands) as well as insomnia, suffering from hot flushes and having to turn the air conditioning off and on as a result, loss of libido whilst male partners “think they’re a rabbit”, and whether or not the kids are going to “dump the grandkids on you”.

She ends her impassioned speech about the menopausal struggles of middle-aged women by encouraging the crowd, in raucous laughter by this point at her delivery, to celebrate being a woman, warts and all!

As yet further proof of her vigour and determination, Michel also shares that she was diagnosed with CML (Chronic Myeloid Leukaemia) in 2012 for which she went through, in her own words, “chemotherapy, blood transfusions, you name it”. Michel first commends the Spanish health care system as one of the best she’s ever come across, urging her audience not to be afraid of it. She also praises the Euro Weekly News team who she reckons are the best team because, whilst she was going through treatment, they “lost their leader, and they carried on”.

As one of the biggest takeaways, Michel delivered the message that “life can change in a moment” so you have to grasp every opportunity as they come to you. As a survivor, as a business woman, as an expat, as a wife, mother, grandmother friend and woman, she certainly deserved to be on that stage on International Women’s Day.