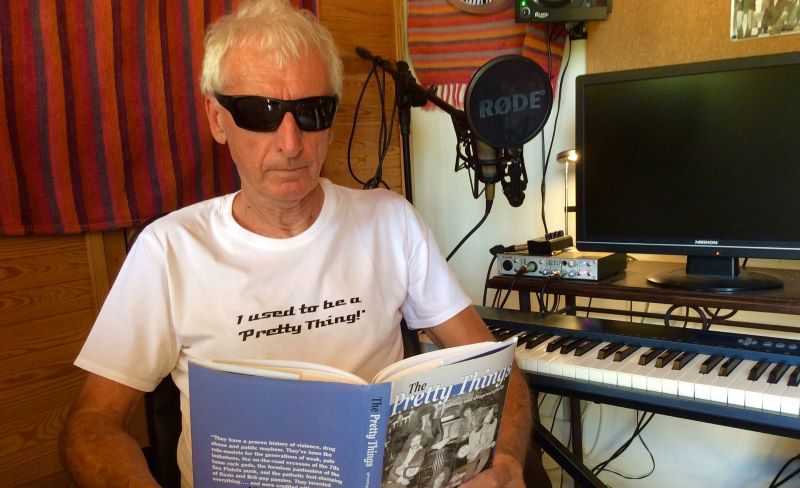 EXCLUSIVE: PRETTY THINGS multi-instrumentalist who calls Spain his home after settling in Spain 18-years ago is currently battling leukaemia.

Jon Povey who plays drums, harmonica, keyboards and sitar has just celebrated his 80th birthday but neither age nor illness are slowing him down as he is just about to releases a new album entitled Dartford Boys which is currently mixing at a Malaga City studio with owner John Wood whilst he is simultaneously writing a book about his life.

Jon, his great friend, former Pretty Things bass player Wally Waller and Phil May, the late singer with the band grew up in Dartford, Kent as did original members of the Rolling Stones and the album is almost a musical autobiography of his growing up in the British music industry over more than 50 years.

He has seen a lot of changes and enjoyed a life that many aspire to and has had some major highs as well as some significant lows but he still loves music and spent time in the UK laying down the album with some young musicians as well as his friend Wally.

At one stage the Pretty Things were signed to the Swan Song label owned by Led Zeppelin and their relationship with guitar god Jimmy Page goes back to 1965 when they recorded a song that he had written and he played guitar on tracks of their second album.

This was before Jon and Wally joined the band but they knew Jimmy Page as he played on a single that they cut when in the Fenmen, so after so many years Page and other fan Robert Plant wanted the Pretty Things on their new label.

There has always been a revolving door with the band and Wally left before the Swan Song days but Jon remained and became very friendly with Jimmy who owned the former home of so-called magician Aleister Crowley and Jon became interested in his writings.

Go forward several decades and out of the blue, Jon received a call from former Pretty Things drummer Twink (who formed the Pink Fairies) who now lives in Marrakesh but wanted to know if Jon would like to become involved in a project to record some of Crowley’s poetry, thus the band Star Sponge Vision was born.

Having spent some time meditating with an Indian Guru Jon said “I was reading the works of Crowley which were quite insightful and showed that he was not the evil monster that he was depicted as by the media and as I recorded Crowley and Me, I could sense his presence.”

It has been an eventful life for the musician who now lives in an apartment on the Benalmadena/Fuengirola border but he has fond memories of all the great musicians he has met, such as the Beatles and Pink Floyd (who were both recording at Abbey Road Studios as the Pretty Things were recording their rock opera SF Sorrow) and doesn’t play down that the band spent much of their time high on different drugs.

10 years ago, he got together with all of the members of the band (except Phil May) who had recorded Parachute in 1970 and as the XPTS they shared a villa in Malaga and rerecorded it in 2010.

Speaking about his time as a Pretty Thing Jon observed “If someone said go into the best sweetshop in the world, eat what you want whenever you feel the need, love it all – that is how I feel about playing in possibly the best band ever!”

Thank you for reading ‘EXCLUSIVE: Pretty Things multi-instrumentalist who calls Spain his home’ and remember that all articles produced by Euro Weekly News may be accessed free of charge.