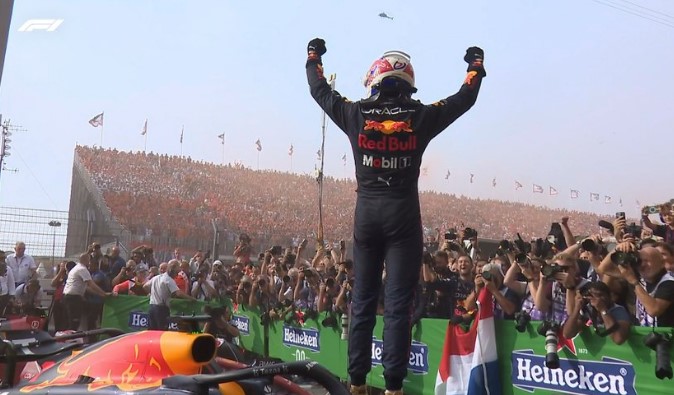 Red Bull’s Max Verstappen extended his lead at the top of the F1 driver’s championship to 109 points this afternoon, Sunday, September 4. The reigning Dutch world champion won his 10th race from 15 this season. He took the chequered flag in his home Dutch Grand Prix in Zandvoort, in front of 105,000 spectators.

Verstappen started the race in pole position, with the two Ferraris of Charles LeClerc and Carlos Sainz respectively, in second and third. Ultimately, they lacked the pace needed to defeat the Red Bull.

He had been leading comfortably until a bizarre sequence of events unfolded. Alpha Tauri’s Japanese driver Yuki Tsunoda pulled up in the middle of the track claiming his pit crew had not fitted one of his wheels correctly.

They informed him that there was nothing wrong but he pitted and after exiting, suddenly pulled to a halt on the track again, This forced a Virtual Safety Car into play. Verstappen pitted and had the hard tyres fitted, while Mercedes also changed to the mediums.

Within six laps of the restart, Britain’s Lewis Hamilton reduced the Red Bull’s lead by almost five seconds with the superior grip offered by his new tyres. Fate played its part though as Valterri Bottass Alfa Romeo cut out in the pit straight with 16 laps remaining, meaning another safety car.

Verstappen took advantage of the safety car to pit for mediums, exiting behind both the Mercedes drivers. George Russell also pitted, but the team left Hamilton out on the circuit. As the race resumed, Verstappen fired his Red Bull past Hamilton to regain the lead.

Verstappen wasted no time getting past Hamilton at the restart 😮#DutchGP #F1 pic.twitter.com/d3muMaULsE

This provoked an incredible outburst over the team radio from the Brit, accusing his team of ‘screwing him over’. Hamilton even used what sounded like X-rated language as he saw his chances of winning his first race of the season slip away.

His teammate Russell took a deserved second place on the podium, with Charles LeClerc clinching third. Hamilton had to settle for a very unhappy fourth place, while Sergio Perez took the other Red Bull home in fifth.

They were followed in sixth by Fernando Alonso’s Alpine, McLaren driver Lando Norris in seventh, and Ferrari’s Carlos Sainz in eighth. The Spaniard finished fifth but received a five-second penalty.

The drivers and teams now have less than one week to prepare for the Italian Grand Prix next Sunday, September 11. Singapore follows Italy, by which time, if Verstappen keeps winning, he will be crowned champion long before the season ends.