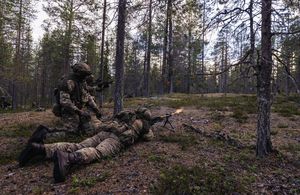 The aim is to further strengthen interoperability in anticipation of Sweden and Finland’s accession to NATO, according to the UK Ministry of Defence on Sunday, September 4.

The short notice command-post exercise took place in Rovaniemi and Rovajarvi, northern Finland, from August 29 to September 2 built on the success of Exercise Vigilant Fox which took place in July.

Secretary of State for Defence Ben Wallace said: “Whilst there is war in Europe, it is more important than ever to strengthen our international partnerships.”

“We welcome Finland and Sweden’s application to join NATO and will continue to exercise together so we are ready to face shared security challenges.”

Ben added: “Exercise Vigilant Knife is an invaluable opportunity for UK personnel to develop their skills and experience of warfighting in cold weather conditions, enabling them to be effective on the battlefield alongside their Finnish and Swedish counterparts”.

Around 80 British Army personnel from C Company, 2 Rifles Battlegroup took part in the exercise, travelling from the island of Santahamina in the south of Finland where they are undertaking a 3-month training deployment as part of a security agreement between the UK and Finland.

Formed of over 2,000 troops, the international force practised delivering and receiving international assistance as well as enhancing tactical and technical interoperability.

As a light infantry company, British personnel provided anti-tank, sniper and reconnaissance capabilities to the exercise and were primarily involved in both offensive and defensive actions to test the readiness of the Finnish forces alongside the Swedish unit.

This added to the invaluable experience that UK troops have already enjoyed whilst on deployment in Finland. Operating in northern Finland presented new challenges enabling troops to train in heavily wooded terrain.