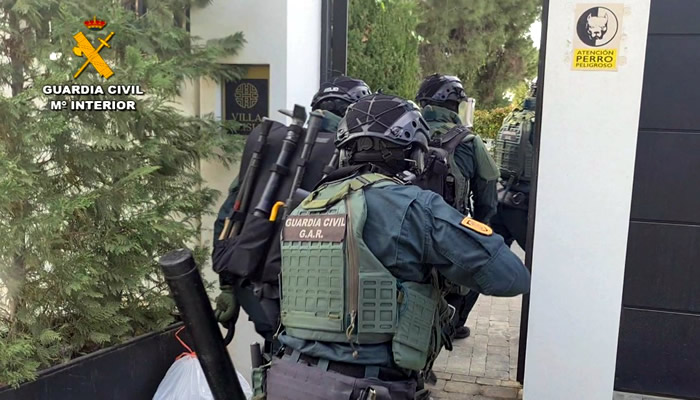 As reported by the Guardia Civil on Saturday, September 3, the two leaders of an international cocaine trafficking criminal organisation have been arrested after separate raids on properties in the Costa del Sol resort of Marbella.

As part of ‘Operation Austral’, another 8 searches were carried out in the Netherlands and Belgium, resulting in another seven individuals being detained.

A total of 3,850 kilograms of cocaine were seized in four containers that the organisation was trying to introduce by sea into ports of Belgium and Holland. High-end vehicles and abundant documentation of interest were also confiscated during the raids.

This operation was conducted in collaboration with AUSTRAL-COLES with the Belgian Federal Police and the Dutch Police. The criminal organisation comprised Belgian and Dutch citizens who acquired the drug in Brazil. It was later transported to ports in Belgium and the Netherlands, by concealing it among the legal cargo of large-tonnage merchandise containers.

‘Operation Austral’ began in 2020 when the Belgian Federal Police and the Dutch Police opened a joint investigation into an organisation responsible for large shipments of cocaine. One cargo weighing 556 kg was seized on May 13, 2020, in Brazil, hidden in a legal cargo of soy flour.

The recipients of the drug were a Belgian and two Dutch companies. As a result of the investigations, it was possible to identify two of the organisers of said shipments who were believed to reside on Spain’s Costa del Sol.

In order to carry out searches, the European police requested the collaboration of the Guardia Civil to proceed with the location of these individuals. Investigations in Spain quickly established the presence of one of the members of the organisation in various points of the national geography throughout the last year.

This denoted the mobility of said person and the security measures he was taking to avoid his whereabouts being detected. He was finally located in a luxury home on an exclusive urbanisation in Marbella, where he was arrested.

Subsequently, Guardia Civil officers managed to locate and arrest the other ringleader – who had fled from the Belgian authorities – in another luxury home in the city of Marbella. Once the two escaped leaders were located in Spain, the rest of the members of the organisation in Belgium and the Netherlands were identified.

European Investigation and Arrest Warrants were issued for the entry into and a search of two addresses in the province of Malaga. At the same time, the Belgian and Dutch police authorities carried out another seven searches simultaneously in those countries. In total, nine people were arrested, including the two leaders of the organisation.

During the course of the operation, police officers seized more than 2.8 tons of cocaine, 3 high-end vehicles, numerous mobile terminals with relevant information, memory devices of interest for the investigation, and abundant documentation for analysis.