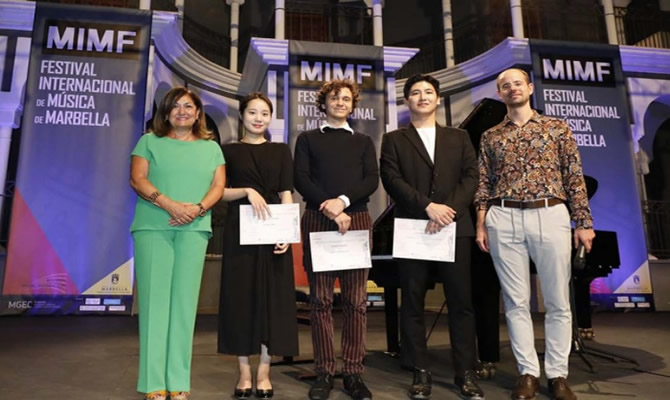 Music lovers should get themselves down to the Malaga city of Marbella this week for the VII edition of the Marbella International Music Festival Contest.

As reported by Marbella Council on its Twitter account, Korean soloist Minsung Lee won the first prize of the winners in the VII edition of the Marbella International Music Festival Contest on Saturday, September 3.

The event was held in the Jose Pernia Calderon auditorium and the cultural venue saw a big crowd of attendees. Second and third place in the competition fell, respectively, to the Korean Hanna Jang and the Russian Simon Karakulidi.

Carmen Diaz, the general director of Culture handed out the awards, including a special winner’s prize chosen by the public, which went to Hanna Jang.

This prestigious event continues on Sunday, September 4, with participants in the international masterclass. On Monday, September 5, it will be the turn – at the Buchinger Wilhelmi Clinic – of the German, Sven Bauer. He is a chamber musician and the winner of numerous music competitions all the world.

On Tuesday, Minsung Lee’s performance will take place at 7pm, at the Manuel Carra Professional Conservatory in Malaga.

There will be a huge concert by international artists at 7:30pm on Wednesday, September 7, at the Ralli Museum in the Malaga city of Marbella. It will feature names such as Samuel Chu (Philippines), Hae Lin Kim (South Korea), Norah Wanton (Italy/ Cuba), Cristina Aracil and Carlos Aracil (Spain), Michael Davidov (Spain/Israel), Alba Llorach (Spain) and JoséeCarlos Fernandez (Spain).

One day later, on the 8th, at 8:30pm, in the JosePernia Calderon, the Argentine and Spanish pianists, respectively, Oriana Kemelmajer and Alba Llorach will perform. On the 9th, at the same time and location, it will be the turn of Juan Ignacio Fernandez Morales, a soloist with national and international orchestras.

The final touch to the program will take place on September 10, at 8:30pm, in the Jose Pernia Calderon Auditorium. This finale will feature the saxophonist Albert Julia, and the pianist and director of the festival, Michael Davidov. It will also feature musicians, international students, and professors, from the Superior Conservatory of Music of the Liceo de Barcelona.

Tickets can be purchased at www.mientrada.net, by calling 902 646 289, or at the auditorium box office. Prices range from €6 to €12, although the performances by Sven Bauer, Minsung Lee, and the masterclass participants, as well as the gala, will be by invitation or free entry, until full capacity.