WATCH: 10 hospitalised in Mohali, India, after 80ft-high fairground attraction plunges to the ground 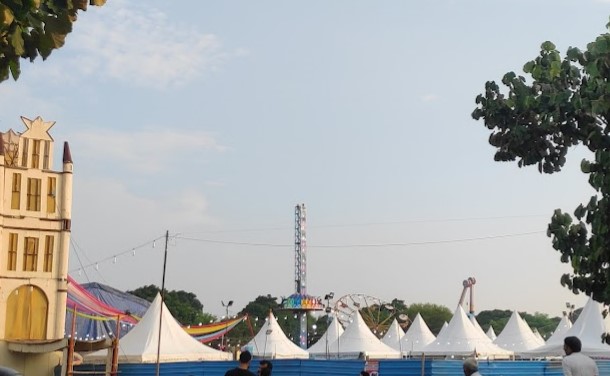 An 80-ft tall spinning joyride fairground attraction has left 10 people hospitalised in Mohali, India, after it crashed to the ground.

A giant spinning joyride fairground attraction standing almost 80ft high was involved in an incident at the Dashera Ground in the Indian city of Mohali on Sunday, September 4. At least 10 people were injured, including women and children who had been on the ride at the time it fell.

In video footage uploaded onto social media, the brightly-illuminated spinning wheel can be seen rotating around a central tower. It suddenly tilts slightly to one side before the wheel crashes to the ground with full force. The incident occurred at around 9pm local time.

Live Visual of swing breaking in #Mohali phase 8, Many people got injured. Around 16 women & kids were hospitalised after the incident. pic.twitter.com/bay5IfzHLB

Victims received head and neck injuries and are said to be in a state of shock. The injured were reportedly admitted to hospital after being taken there by a nearby PCR, according to tribuneindia.com.

The publication also reported that staff and security personnel operating the ride fled the scene immediately after the accident happened, with members of the public giving chase.

A Jaipur-based company owned by one Mukesh Sharma owns the Dushera Ground and the rides said DSP City-2 HS Bal. He has allegedly been contacted to present himself, along with the park’s management, to make a statement, after which, the relevant action will most likely be taken.

“The injured have been rushed to the Civil hospital. We are investigating the matter and action will be taken soon”, said Mohali DC Amit Talwar.

It has been suggested by eyewitnesses to the accident that the necessary safety measures had not been implemented on the attraction. Around 15 persons are thought to have been on the spinning wheel at the time of its plunge.

There was no ambulance present at the fairground, which delayed the transfer of the injured to a hospital. Doctors at the Phase-6 Civil Hospital have confirmed that five patients were admitted to the facility. They were said to be suffering mainly from neck, abdominal, and back injuries, but no open cuts were reported.

A strong outpouring of anger has reportedly been seen on social media toward the operators of the Dussehra Ground.