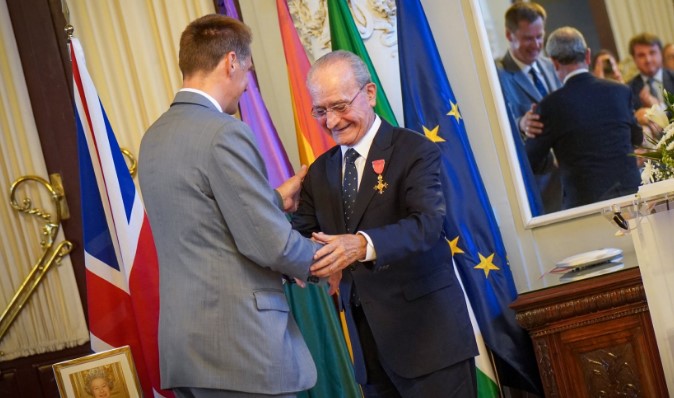 An honorary OBE was awarded to the mayor of Malaga, Francisco de la Torre, by Hugh Elliott, the British ambassador.

Francisco de la Torre, the mayor of Malaga, this Monday, September 5, received the title of Honorary Officer of the Order of the British Empire (Hon OBE). This magnificent distinction was presented to the mayor by Hugh Elliott, the British ambassador in Spain.

The ceremony took place in the Hall of Mirrors inside Malaga City Hall. During the celebration, De la Torre expressed his ‘gratefulness for the “immense honour” that the United Kingdom Government has granted him by awarding him this decoration.

He recalled the Spanish-British gatherings held in Malaga in October 2018. These were meetings in which, according to the mayor, they made a great effort to make them a success, which was logical since “they increased the visibility and projection of Malaga in the British community, so important for us”.

De la Torre has highlighted that: “the British community is the most important of all those in our province”, due to the number of British residents who live permanently in Malaga and on the Costa del Sol .

The major gave a special mention of the discovery of Malaga and Torremolinos as attractive tourist destinations for British citizens in the first decades of the 20th century. This was an interest that later extended to the entire Costa del Sol and that today makes Malaga, the United Kingdom’s first choice of holiday destination.

Among other vestiges of the British world in Malaga that De la Torre recalled are the construction of the city’s English Cemetery. It is the first of its type in Spain for people of the Protestant religion.

According to the City Council, among the arguments for conferring this title on De la Torre are his services to “promote relations between the United Kingdom and Malaga”.

Malaga Council emphasized that, during his time as mayor, De la Torre has “promoted British tourism in Malaga”, as well as being a “great supporter of the British community established in Malaga in the cultural, economic, and social spheres”, as reported by malagahoy.es .