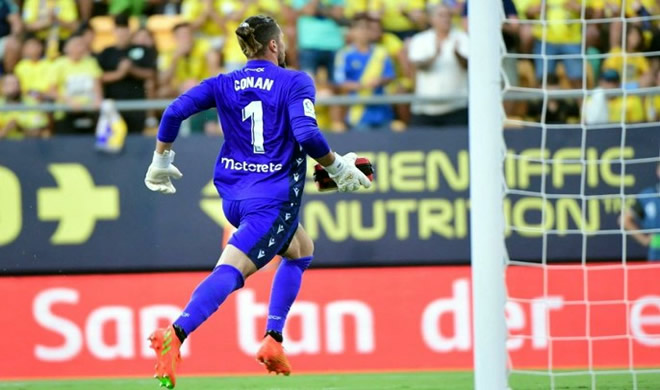 Image of Ledesma with the defibrillator. Credit: [email protected]

Barcelona’s LaLiga match was paused for an hour after a fan suffered a heart attack in the stands, with Cadiz goalkeeper Ledesma the hero as he sprints to the crowd with a defibrillator.

Barcelona’s LaLiga Santander match away to Cadiz on Saturday, September 10, saw the game stopped for around one hour after a fan suffered a heart attack in the stands at the Estadio Nuevo Mirandilla. It was an incident that saw Cadiz goalkeeper Jeremias Ledesma become the hero of the day.

As reported by Mundo Deportivo, the referee, Del Cerro Grande, stopped the game with just nine minutes left to play. Several players pointed out to him that a medical incident had occurred in the stands behind the Cadiz goal.

Red Cross volunteers were quickly on the scene. Suddenly, Ledesma, Cadiz FC’s Argentinian keeper was seen sprinting across the pitch carrying a defibrillator, which he threw to the medics in the stands. A space was cleared from around the patient to allow the medics to work on him.

Cadiz keeper Jeremias Ledesma sprinted over with a defibrillator and threw it into the stands after a medical emergency in the Cadiz vs. Barca game. Thankfully the fan is now stable, and thoughts with him. Huge praise to Ledesma for his quick thinking 👏pic.twitter.com/SRVsEjfRx8

Some of the players were seen to be visibly shaken to tears by the life-or-death situation they were witnessing first-hand. Barca’s Ronald Araujo even prayed on the pitch. An ambulance arrived but it was decided best to not attempt to move the fan.

Eventually, the man was brought to the pitch on a stretcher, to a loud rapturous round of applause from all the supporters, who could sense that he was going to be alright. The fright was not over yet, because more commotion broke out as another man collapsed in the same area. It appeared he suffered a bout of ‘dizziness’, and rose to a similar round of applause.

Well deserved ovation for the Cadiz medical staff who helped stabilize the fan for more than half an hour 👏👏 pic.twitter.com/Wk7gDhIoTu

The second fan which received medical attention seems to be in a good state.#CadizBarça pic.twitter.com/MsU93jkjrn

Del Cerro Grande restarted the match, with Barcelona leading 2-0, with goals from Frenkie de Jong and Robert Lewandowski. Football really pales into insignificance when a person’s life is at stake, and it was clearly difficult for both teams to motivate themselves.

Ansu Fati put the visitors 3-0 ahead after 86 minutes though, with Lewandowski unselfishly laying the ball off to Fati to hit an empty net. Dembele scored a fourth in the 93rd minute, with Ledesma somehow failing to hold his shot and seeing the ball end up in the back of his net.