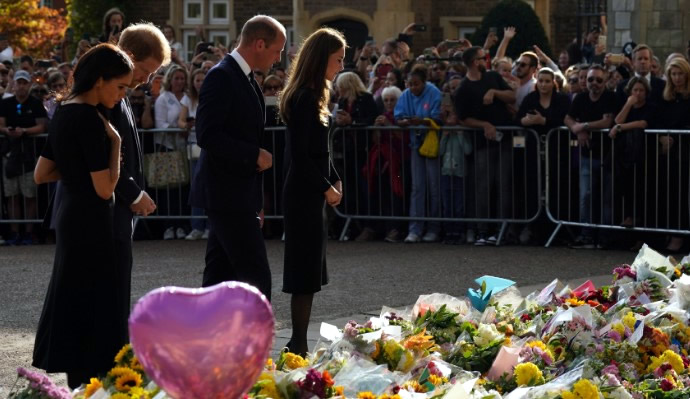 It is believed that a phone call from the new King led to William extending an 11th-hour ‘olive branch’ inviting Harry and Meghan to join him and Kate on a walkabout outside Windsor Castle.

It has been claimed this evening, Saturday, September 10, that a direct order from King Charles III led to his two sons, William and Harry, calling a truce and performing a walkabout together outside Windsor Castle, along with their respective wives.

The Wales's and the Sussexes have come together to view some of the many tributes for the Queen left by the public outside Windsor Castle. A Palace spokesperson says, "The Prince of Wales invited the Duke and Duchess of Sussex to join him and the Princess of Wales earlier." pic.twitter.com/YCXhu9yRlk

Posting on Twitter, Omid Scobie, Harry and Meghan’s preferred journalist, and friend, said that the new Prince of Wales made the gesture of an ‘olive branch’ at the ’11th-hour’. A Kensington Palace source informed the Daily Mail that after receiving a phone call from his father, William had invited the couple to join him and the Princess of Wales.

The Waleses had always been scheduled to greet well-wishers at Windsor Castle, but royal sources say the decision to invite the Sussexes was made in the eleventh hour. It is, without a doubt, a significant moment in the history of the relationship between the two brothers.

The unexpected sight of William and Harry walking out, accompanied by Kate and Meghan was clearly welcomed by the huge crowd of royal fans assembled outside the gates of Windsor Castle. A 40-minute inspection of the floral tributes paid to the dear, departed Queen, followed, with the four of them all getting deeply engrossed in the moment.

The Prince & Princess of Wales are meeting members of the public who are gathered outside Windsor Castle. pic.twitter.com/8SqZgWWrVb

The Duke & Duchess of Sussex greet mourners who have travelled to Windsor to pay their respects. pic.twitter.com/UdsltHO59V

A touching moment occurred when a small child was crying and Kate approached them and crouched down to speak, and the child immediately stopped crying.

It should be hoped that this could be the turning point the two brothers needed to mend their fractured relationship. Harry and Meghan are currently staying in Frogmore Cottage which is only 700 metres away from William and Kate’s new residence at Adelaide Cottage, but there had been no previous talk of any plans for them to meet.

A subtle hint was maybe dropped by the Kensington Palace source, who allegedly commented: ‘It is, without a doubt, a significant moment in the history of the relationship between the two brothers’. The two princes were last seen together when they attended the unveiling of a memorial to their mother, Princess Diana.

It is thought that today is the first time the two couples have been together in public since Commonwealth Day on March 9, 2020.

After chatting, hugging and sharing sympathies with members of the public for over 40 minutes, the Prince and Princess of Wales and the Duke and Duchess of Sussex have headed back into the Windsor Estate together. Both couples left in the same car, driven by William. pic.twitter.com/V2ettkmKnt