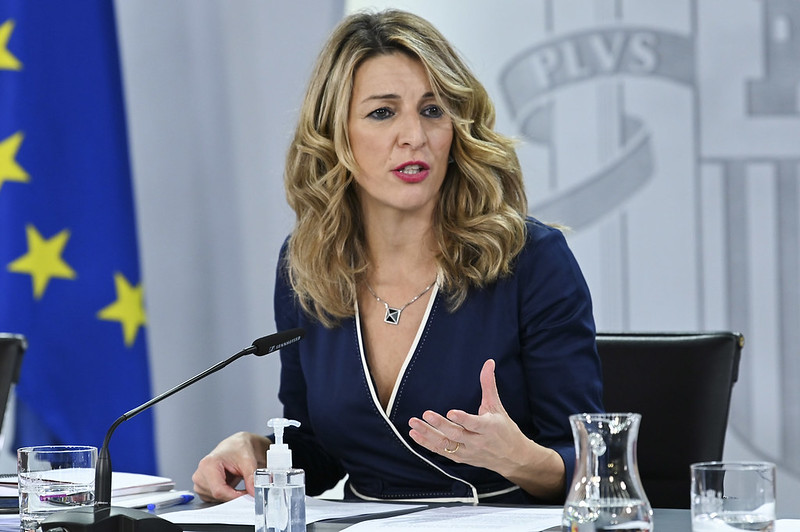 17:15 (September 12) – All the main supermarket companies in Spain have met with Labour Minister Yolanda Díaz and Minister of Consumer Affairs, Alberto Garzón to discuss the call for an affordable basket of basic products.

Diaz said after the meeting that she was heartened by the constructive manner in which the supermarkets approached the topic. She told eldiario that there were many contributions and multiple proposals were put forward.

Saying these will all be looked into and in particular the legal aspects of any agreement, bearing in mind that competition law prohibits price fixing.

All of those who attended the meeting committed to exploring the idea of a basic shopping basket, one that is of quality and which guarantees a healthy diet. They also all agreed that such a basket should contain fresh meat, fish, eggs and vegetables.

19:17 (September 7) – Carrefour has asked to meet Spain’s Second Vice President and Labour Minister Yoland Diaz, who earlier this week said she wanted to meet with businesses to discuss reducing the price of some staple foods.

Carrefour has said that they would like to meet with the minister to talk further about her plans and to see what she has in mind.

But ever quick off the mark, the retailer has responded to the minister’s call by launching a basket of 30 everyday items for the low cost of €30.

The basket is made up of so called-white label products and includes breakfast, preserves, pasta, oil, and coffee… along with a selection of drugstore, cleaning and perfumery items.

It is not known whether the minister has accepted the request as yet or whether they have been in touch to discuss a suitable date for a round table discussion.

19:49 (September 5) – Spain’s Vice President Yolanda Diaz is seeking to broker an agreement between consumer associations and food distributors that will result in basic food prices being fixed.

Speaking on Monday, September 5 she said: “Food is being a huge problem for our country today.” Although this falls outside of the labour minister’s area of responsibility she feels strongly enough about the issue to tackle it.

What she would like to see is an agreement to fix the price on 20 or 30 staple food products, which she says increase in price significantly between the farm and the store. Using the example of oranges, she says that a farmer gets 15 cents for a kilo of oranges but you will have to pay at least €1.40 in the store.

That markup of around 80o per cent she says is unacceptable and puts some of these foods outside the affordability of poorer people.

Working with the Minister of Consumption, Alberto Garzón, she wants to establish a “basic shopping basket” that is made up of healthy staple foods and which is kept at an affordable price.

What Diaz isn’t looking for is a legal solution, but rather an agreement that works for all parties.

Some experts believe that Diaz is naïve and does not understand why the pricing is as it is, with no one in the food chain getting rich at someone else’s expense.

They say food prices are rising due the cost of inputs and there is little they can do to stem the increases. Supermarkets are however, keen to have the discussion as they believe something needs to be done.

What can be done remains to be seen, but for all the accusations of naivety Spain’s vice president is right to seek solutions to reduce basic food inflation.