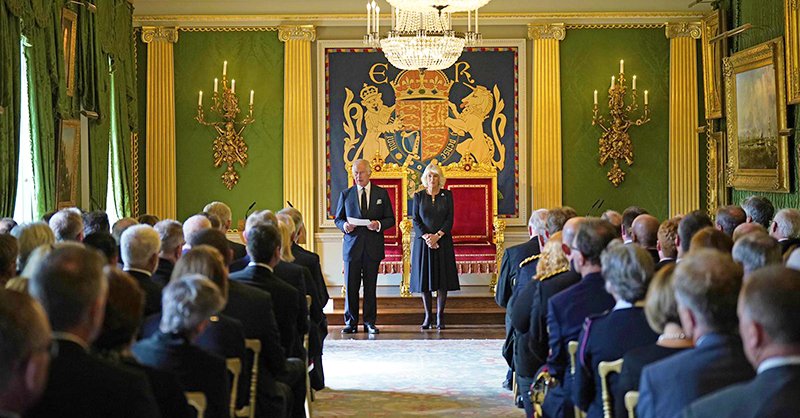 His Majesty the King Charles III has replied to the message of condolence for his late mother Queen Elizabeth II at Hillsborough Castle, as reported on Tuesday, September 13.

King Charles III replied to the message of condolence at Hillsborough Castle stating:

“My Lords, Ladies and Gentlemen,”

“On behalf of all my family, I can only offer the most heartfelt thanks for your condolences. I am here today at a time of great personal sorrow as we mark the death of my beloved mother, after a life most faithfully dedicated to the duty to which she had been called.”

“It is fitting that we should meet at Hillsborough, which my mother knew so well, and in whose beautiful rose garden she always took such pleasure.”

“In the years since she began her long life of public service, my mother saw Northern Ireland pass through momentous and historic changes.”

“Through all those years, she never ceased to pray for the best of times for this place and for its people, whose stories she knew, whose sorrows our Family had felt, and for whom she had a great affection and regard.”

“My mother felt deeply, I know, the significance of the role she herself played in bringing together those whom history had separated, and in extending a hand to make possible the healing of long-held hurts.”

“At the very beginning of her life of service, The Queen made a pledge to dedicate herself to her country and her people and to maintain the principles of constitutional government. ”

“This promise she kept with steadfast faith. Now, with that shining example before me, and with God’s help, I take up my new duties resolved to seek the welfare of all the inhabitants of Northern Ireland.”

“During the years of my mother’s reign, it has been a privilege to bear witness to such a devoted life. May it be granted to us all to fulfil the tasks before us so well.”

The news comes after the controversial former King Juan Carlos I has said that he will attend the funeral of Elizabeth II in London later this month, after the Spanish government had asked him not to attend, given the potential for his presence to overshadow the current King.