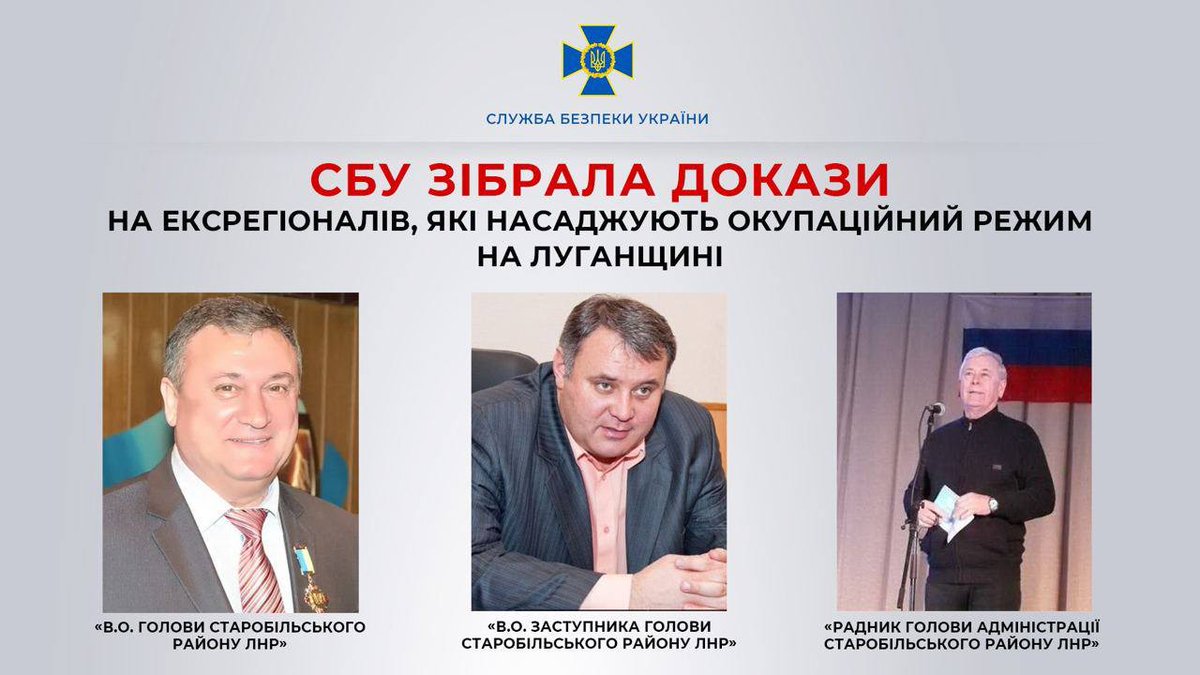 Ukraine’s Security Service has reportedly collected further evidence on ex-deputies who imposed the Russian-occupation regime in Luhansk region, as reported on Tuesday, September 13.

The offenders formed the “core” of the occupation administration in the temporarily occupied territory of Starobilsk district of Luhansk region.

In particular, we are talking about: “acting head”, “acting deputy head”, “advisor to the head of the administration of the Starobilsk district of the Luhansk People’s Republic”.

The former members of the Party of Regions had already worked in the same team and held similar positions in the Starobilsk District State Administration until 2014.

After the full-scale invasion of Russia, the officials expected the capture of the district. They perceived it as an opportunity for “revenge” and on their own initiative cooperated with the enemy.

Propaganda actions and public ceremonies on the occasion of the “red dates” of the Russian calendar; Rallies in support of the Russian invasion; Meetings on the work of the occupation administration, in particular to expand propaganda influence among the local population.

Information about these events, as proof of cooperation between Ukrainians and the “new government”, is actively picked up and dispersed by aggressor-controlled media and Internet resources that create anti-Ukrainian propaganda content.

“Officials” willingly give interviews to Russian media, in which they repeat well-known Russian narratives about: “liberation” of local residents by the “Luhansk army” from the “suffering” caused by Ukraine; “revival of Russian culture” in the Starobilsk region; the need to support the “Luhansk people’s militia” as a guarantor of these “transformations”.

Currently, three offenders have been notified of suspicion under three articles of the Criminal Code of Ukraine: under Part 3 of Art. 28 and Part 6 of Art. 111-1 (conducting information activities in cooperation with the aggressor state and its occupation administration aimed at supporting the aggressor state, its occupation administration or armed groups, committed by an organised group);

Under Part 5 of Art. 111-1 (voluntary occupation by a citizen of Ukraine of a position related to the performance of organizational and administrative or administrative and economic functions in illegal authorities established in the temporarily occupied territory, including in the occupation administrations).

We warn that anyone who has sided with the enemy will certainly be punished by law. Collaboration with the occupiers is punishable by 10 years in prison.

The operation was conducted by investigators of the SBU Main Directorate in Donetsk and Luhansk regions under the procedural supervision of the Luhansk Region Prosecutor’s Office.

The news follows reports that claim that starting from September 19, departure of Ukrainian citizens whom Russia considers to be conscripts in Russian-occupied Crimea will be possible only with the written permission of a “military enlistment office, as reported on Tuesday, September 13.