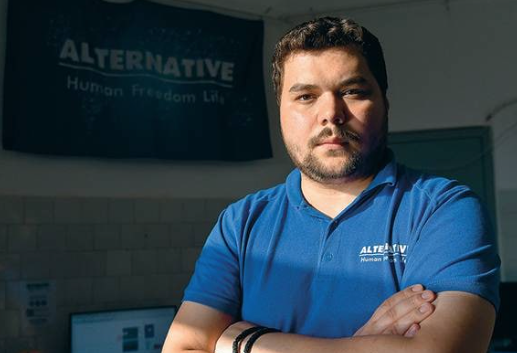 REPORTS circulating on social media on Wednesday, September 14, suggest that Oleg Melnikov, the leader of ‘Alternative’ – a public movement against slavery – has disappeared in the Kharkiv Region of Ukraine.

Slavery fighter Oleg Melnikov, who is believed to have arrived in Ukraine’s Kharkiv Region with a colleague to distribute humanitarian aid, has disappeared and is feared dead.

According to Baza, Melnikov was last seen on September 9, during the height of Ukraine’s counteroffensive in the region.

He was due to return to Russia, as reported by the media outlet, due to the fact the area was ‘getting too dangerous’, however, he then disappeared and lost contact with his ‘Alternative’ group.

His whereabouts for the past five days is unknown.

Melnikov used to cover most of the organisation’s expenses, according to the members of the movement.

The group said that due to Melnikov’s disappearance, there are problems with financing and because of this, Alternative has now stopped accepting new applications for people’s assistance and had suspended its activities.

According to their website, the Alternative movement was founded in 2011 by Oleg Melnikov.

The purpose of the organisation is the liberation of people from various types of slavery. Over the entire period of its existence, 1,500 people were released. Another 2,400 people got home with the help of the Alternative.

As previously reported, on Monday, September 12, Ukraine recaptured nearly the whole of the Kharkiv Oblast in a rapid counter-offensive against Russia’s forces, according to the US Institute for the study of war (ISW).

On Tuesday, September 13, British intelligence revealed that the Russian 1st Guards Tank Army was pushed out from Kharkiv.

Also on Tuesday, September 13, Ukraine’s Armed Forces announced that they had officially ‘liberated’ five settlements in the Kherson region.

The counteroffensive from Ukraine was hailed as a clever diversion ‘because it was so credible’.

According to Jarmo Lindberg, a former commander of the Defence Forces of Finland, Ukraine’s clever diversion succeeded in Kharkiv because it was so credible.

“Ukraine’s successful offensive in the Kharkiv region was based on a clever diversion that was built up to be entirely credible,” Lindberg said in an interview with STT on Wednesday, September 14.

He added: “In addition to President Volodymyr Zelensky’s openly expressed intentions to attack, Ukraine also massed troops in the south at Kherson, where it used long-range weapons in a manner reminiscent of normal offensive preparations.