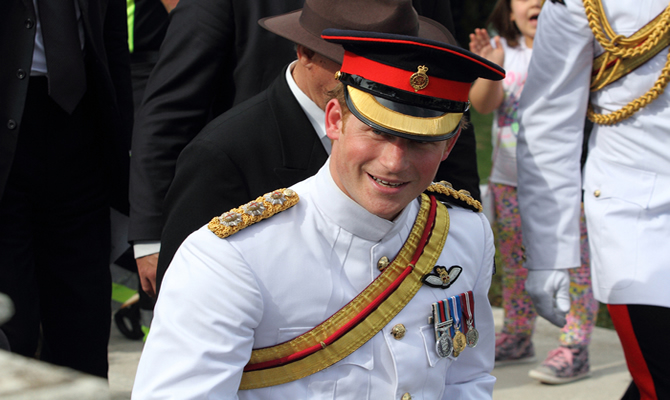 Image of Prince Harry in the Commonwealth War Cemetery in Cassino, Italy, on 18/05/2014. Credit: Antonio Nardelli/Shutterstock.com

It has been revealed that for the special vigils this weekend, both Princes Harry and Andrew have been granted permission to wear their military uniforms.

It has been revealed this evening, Thursday, September 15, that both Princes Harry and Andrew have been granted special permission to wear their respective military uniforms while attending lying-in-vigils at the Queen’s coffin, according to The Mirror.

A vigil will take place tomorrow, Friday, September 16, in Westminster Hall, attended by Her Majesty the Queen’s four children, during which Andrew will be allowed to don his uniform. It will be a repeat of the vigil staged earlier in the week at Edinburgh’s St Giles’ Cathedral, where King Charles, Princess Anne, Prince Andrew, and Prince Edward all stood guard over their mother’s coffin.

On Saturday, September 17, a similar vigil will take place, involving the Queen’s eight grandchildren. They will stand in silence alongside their grandmother’s coffin for 15 minutes. It is thought that the Prince of Wales and the Duke of Sussex will be joined by Princesses Beatrice and Eugenie, Zara and Peter Philips, Lady Louise and James, and Viscount Severn.

“Common sense has prevailed. It was a ludicrous situation given the Duke of Sussex has served his country and is a highly respected member of the armed forces with everything he has done for veterans”, a royal source told The Mirror.

They added: “It is important that the Queen’s grandchildren are all made to feel welcome and comfortable as they grieve their beloved grandmother together”.

𝐔𝐏𝐃𝐀𝐓𝐄: In a dramatic u-turn, palace officials have informed Prince Harry that he CAN wear his military uniform at a final vigil. On Saturday evening, Harry will join seven other grandchildren at Westminster Hall to stand in silence for 15 minutes by the Queen’s coffin.

Prince Andrew had previously been banned from wearing his military colours to any of the funeral ceremonies after Her Majesty stripped him of his honorary titles earlier this year while his legal case with Virginia Guiffre was ongoing.

Harry had also lost the privilege of wearing his uniform after giving up royal life and moving to California with his wife Meghan. Once servicemen and women become civilians they are not permitted to wear military uniforms. The Duke of Sussex has been granted special dispensation for this Saturday’s vigil.