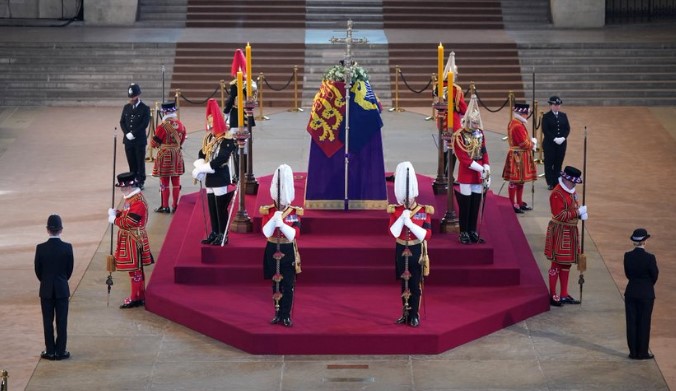 Image of the Vigil of the Princes in Westminster Hall. Credit: [email protected]

A historic Vigil of the Princes took place in Westminster Hall with King Charles III leading his siblings in the ceremony.

King Charles III this evening, Friday, September 16, took part in the historic Vigil of the Princes. He led the quartet of Queen Elizabeth II’s children, along with Princess Anne, Prince Andrew, and Prince Edward once more into Westminster Hall where the coffin of their mother has been lying in state.

As part of the poignant event, each of them stood silently in full military uniforms at the four corners of the late monarch’s coffin, keeping guard over it for 15 minutes. A constant stream of members of the public filed silently by as the royals conducted their ceremonial vigil.

The Queen Consort, Vice Admiral Sir Tim Laurence, the Countess of Wessex, accompanied by several of the Queen’s grandchildren, watched on in silence. At the end of the vigil, a rapturous round of applause from the assembled masses greeted the four royal siblings as they exited Westminster Hall.

Today’s event was the second such vigil of the last few days, following a similar ceremony in Edinburgh. It was historic in that it was the first time that a female – Princess Anne – had ever participated in a Vigil of the Princes.

Prince Andrew, the Duke of York,  received special dispensation to wear his military regalia at the ceremony. According to royal sources, it was allowed out of respect to his late mother.

Tomorrow, Saturday, September 17, a similar ceremony will take place involving the Queen’s grandchildren. The Duke of Sussex has also reportedly been granted permission to wear his full military uniform for the vigil.