Nancy Pelosi, the US Speaker of the House arrives in Yerevan, Armenia 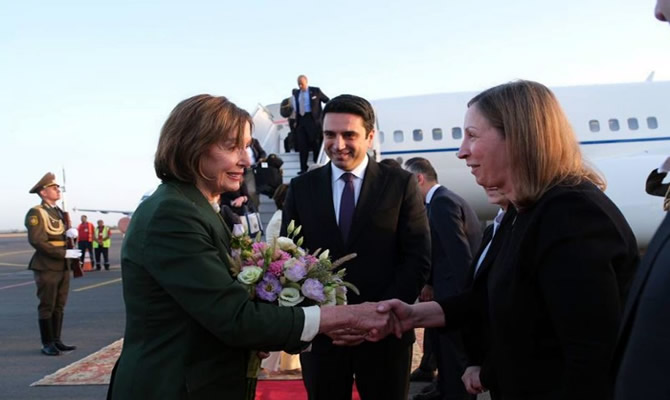 Nancy Pelosi has arrived in Armenia where the US Speaker of the House will demonstrate American support for the country.

Nancy Pelosi, the US Speaker of the House arrived in the city of Yerevan this evening, Saturday, September 17, in a display of support from the American government for Armenia.

She is leading a congressional delegation that will meet with the country’s officials in light of the recent attacks by neighbouring Azerbaijan. Pelosi flew into Zvartnots International Airport and was then driven directly to the capital city.

A meeting is scheduled with Armenian Prime Minister, NikolPashinyan and his government. The US Secretary of State, Anthony Blinken, made calls yesterday, Friday, September 16, to the leaders of both states. He spoke with Armenian PM Nikol Pashinyan and offered condolences for the loss of life in the recent fighting. with Azerbaijan.

Spoke with Armenian Prime Minister @NikolPashinyan today on the evolving situation on the Armenia-Azerbaijan border. I offered my condolences for the loss of life in the recent fighting.

He had previously contacted Azerbaijani President Ilham Aliyev, on Tuesday, September 13, urging him to cease his country’s aggression toward Armenia.

Spoke to Azerbaijani President Ilham Aliyev and conveyed that the United States urges an immediate end to military actions along the Armenia-Azerbaijan border.

In an official statement released today, she said: “We are proud to travel to Yerevan following the 2019 passage of House Resolution 296, introduced by Chairman Adam Schiff, which recognizes the murder of 1.5 million Armenians by the Ottoman Empire as genocide, and following President Biden becoming the first president to formally acknowledge the Armenian Genocide”.

“It is the moral duty of all to never forget: an obligation that has taken on heightened urgency as atrocities are perpetrated around the globe, including by Russia against Ukraine. Our Congressional delegation’s visit to Armenia is a powerful symbol of the United States’ firm commitment to a peaceful, prosperous and democratic Armenia, and a stable and secure Caucasus region”, she continued.

Ms Pelosi added: “In working meetings with government leaders, civil society members and members of the security establishment, we will convey the strong and ongoing support of the United States, as an OSCE Minsk Chair and longtime friend to Armenia, for a lasting settlement to the conflict in Nagorno Karabakh”.

“Our distinguished Congressional delegation members have been proud and longtime champions of Armenia”. Speaker Pelosi concluded.