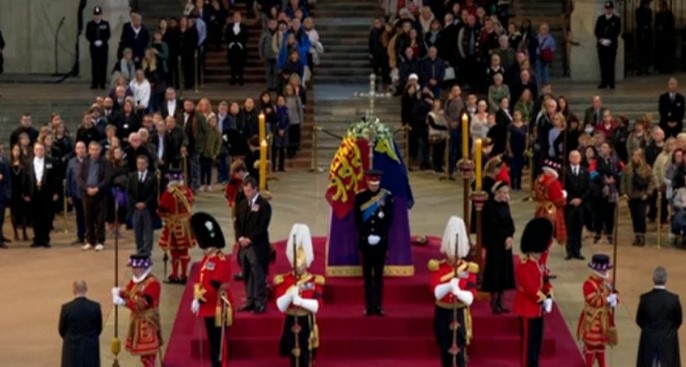 Spain’s monarchs, King Felipe VI  and Queen Letizia were among many world leaders paying their final respects to HM the Queen in Westminster Hall.

The trio spent just over a minute standing silently with their heads bowed in the funeral chapel where the late monarch’s coffin is lying in state. Don Felipe crossed himself before they departed the room. They are expected to be joined later today by the King‘s parents King Juan Carlos and Queen Sofía.

King Felipe and Queen Letizia of Spain have arrived at Westminster Hall to pay their respects to Queen Elizabeth II. pic.twitter.com/AufIjLcC18

Other world leaders paid their last respects to Her Majesty, including US president Joe Biden, and the First Lady, Jill Biden. The President made the sign of the cross and touched his heart as they stood in silence paying their last respects.

After signing a book of condolence, Mr Biden told Sky News that it had been an honour to meet the Queen, who reminded him of his mother. He added: “To all the people of England, all the people of the United Kingdom, our hearts go out to you and you were fortunate to have had her for 70 years, we all were. The world is better for her”.

Earlier in the day, Ursula Von der Leyen, the EU president attended the Hall, accompanied by Charles Michel, the President of the European Council. Brazil’s Jair Bolsonaro was also present.

Accompanied by an entourage of Ukrainian officials and bodyguards, Olena Zelenskyy, Ukraine’s First Lady, also attended the chapel in place of her husband Volodymyr, to pay respect to Her Majesty. Olena was later seen sitting in Buckingham Palace speaking with Kate, the Princess of Wales.

Around 500 heads of state are expected to attend the Queen’s state funeral tomorrow, Monday, September 19, as well as a reception that is being hosted at the Palace this evening by King Charles III.