The Kremlin dismisses mass burial discoveries in Ukraine as ‘lies’ 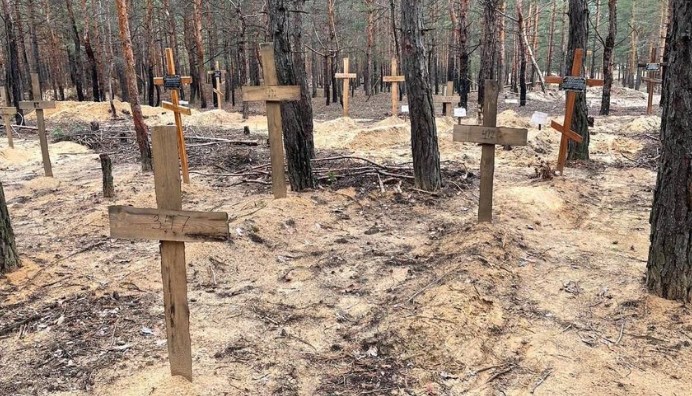 Image of mass burial site found near the city of Iyzum in the Kharkiv region. Credit: [email protected]

The Kremlin has dismissed claims of mass burial sites as lies, accusing Ukraine of fabricating discoveries.

Speaking on Monday, September 19 Kremlin spokesman Dmitry Peskov said: “These are lies, we will stand up for the truth in this story.”

Seeking to continue their narrative of the events in Ukraine, Peskov denied that Russian soldiers were guilty of any atrocities in Ukraine. Repeating previous statements denying Russian involvement, he dismissed reports from areas taken back by Ukraine and those of local residents.

Claims by Ukraine that Russian forces had been driven out were also dismissed by Peskov, repeating Russian President Vladimir Putin’s claims that their divisions were withdrawn to concentrate on other areas in the country.

A counter-offensive by Ukraine had recaptured key towns and cities in the east crippling Kremlin supply lines, and uncovering claims of torture and mass murders.

Continued fighting in the area has seen many citizens flee, with Russian forces firing rockets into the area and also close to the nuclear power station. The latter has been disputed by the Russians who claim Ukraine is guilty of bombing the area.

According to locals many have been without water and electricity for a week, whilst others have complained of regular beatings.

Ukraine President Volodymyr Zelensky repeated his oft-expressed view on the same day, saying that: “Russia endangers the whole world. We have to stop it before it’s too late.”

Numerous leaders have called on Putin to call off the invasion and to come to the table, however so far there has been little indication that he is either going to accept responsibility for the atrocities or withdraw his troops.

For now, the Kremlin who dismisses mass burial discoveries in Ukraine, and seems set to continue along the same path.