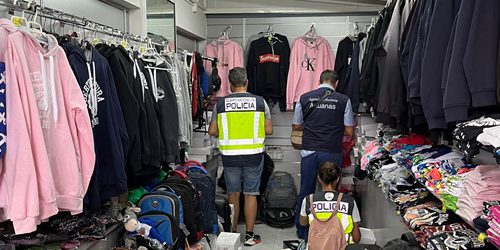 More than five tonnes of fake products of high-end brands have been seized from a distribution network operating in the Canary Islands, by the Spanish National Police, in a joint operation with the Tax Agency’s Customs Surveillance, as reported on Tuesday, September 20.

The Spanish Police oversaw the largest seizure of fake high-end brand products to date in Europe, carried out as part of an operation that has resulted in 17 arrests, the search of 14 bazaars, four warehouses and three homes, and the seizure of €70,000 in cash and three vehicles.

The items seized, according to the estimation of specialised experts, could be worth more than €300 million.

The investigations began after police discovered the existence of several shops on the island of Tenerife, allegedly dedicated to the sale of counterfeit goods, which had a common distributor, based in the province of Las Palmas de Gran Canaria, specifically in Fuerteventura, who formed the head of a criminal structure dedicated to the sale and distribution of counterfeit material.

The EUROPOL National Central Unit was also informed of the actions taken.

The police operation, known as DJANGO, culminated in the dismantling of a criminal organisation specialised in the large-scale distribution and commercialisation of counterfeit products of exclusive brands that operated on the islands of Tenerife and Fuerteventura.

The organisation acquired the counterfeit material mainly in the Cobo Calleja industrial estate in Madrid, and marketed its products especially in tourist areas, taking advantage of the presence of a large population with short periods of residence in the country.

The unit became aware of the existence of a wholesale point of sale of counterfeit leather goods in the south of Tenerife.

Surveillance and monitoring work led to locating the person in charge of this premises, observing how he sold these products to various individuals, both for street sales and for sale in bazaars.

After this, they made enquiries with the parcel delivery companies and determined that the shipments were coming from Fuerteventura, and that several Chinese citizens were involved in the organisation’s leadership.

the Customs Surveillance Service then joined the operation, determining that there were numerous products in Customs in the name of the person in charge of the distributor in Fuerteventura, proceeding to a meticulous monitoring of his activity.

From Fuerteventura, the leader of the network sent products to other points on the island and to Tenerife, where his contact distributed and marketed them on the island through his businesses.

The investigation was brought to the attention of the Juzgado de Instrucción number 4 of Arona, in Santa Cruz de Tenerife, which is investigating the case.

The news follows reports that the Spanish National Police have collaborated with the British authorities to arrest a rapist following a complaint from the victim in London, as reported on Friday, September 16.