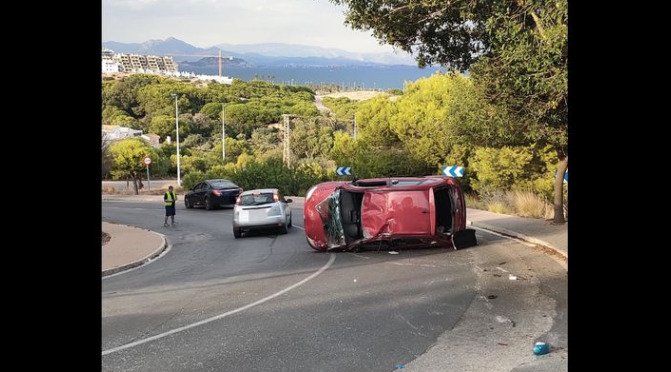 Photos shared on social media on Saturday, September 24 show the aftermath of a car crash on ‘cardiac hill’ in Santa Pola’s Gran Alacant.

Facebook page Gran Alacant Today shared a picture of the crash alongside the caption: “Traffic accident on Avenida del Mediterráneo a few minutes ago. Fortunately without victims, only injured.”

Gran Alacant Noticias said that the incident occurred at around 7.20 pm and shared a picture of police and ambulance crews at the scene.

One eyewitness said on Facebook: “The curve is very dangerous. Three cars in front of me have crashed and a red car overturned sideways down the slope. My whole body is shaking.”

Another person noted: “This curve is very dangerous. The asphalt is very slippery and with three drops of rain, it looks like an ice rink.”

“Hope everyone is okay, people need to slow down,” another person said.

The incident comes months after Euro Weekly News exclusively reported another accident which occurred on Calle Canarias in Gran Alacant.

On Wednesday, February 16, an eyewitness to the incident, which saw two vehicles collide, said that he spoke to police about the lack of road markings in the urbanisation, however, according to Local Police, “because it is classed as private urbanisation they cannot do anything about it.”

Thankfully, following that incident, new road markings were eventually added to the crossings on Calle Canarias near the Av. D’Escandinàvia Unide Market in Gran Alacant.

The road, which lacked any clear markings, now has the word ‘STOP’ added at the junction with extra line markings to help road users distinguish the intersection in the hopes of keeping Gran Alacant residents and drivers safe.