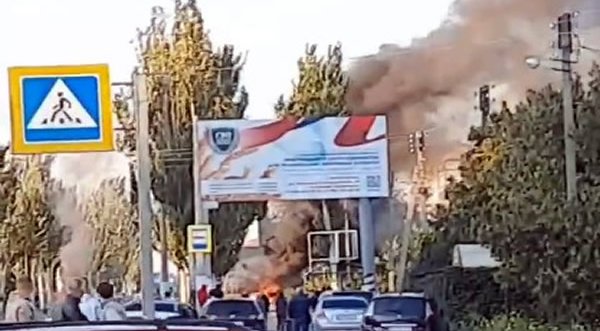 A huge car explosion that occurred in the Ukrainian city of Melitopol seems to be a mystery with nobody claiming responsibility for it.

A car explosion this afternoon, Sunday, September 25, in the Ukrainian city of Melitopol has been met with a wall of silence with nobody coming forward to admit responsibility for it.

Ivan Federov, the mayor of Melitopol since 2020, posted on his Telegram channel: “Just now: a loud explosion in the northern part of Melitopol, on Lomonosova Street. According to preliminary data, a car is on fire. We are collecting detailed information”. He updated his post a few minutes later with: “Corrected information: one car definitely burned to the ground”.

⚡️A video of a burning car after an explosion in the temporarily occupied Melitopol appeared on social networks.

Vladimir Rogov, the chairman of the movement ‘We are together with  Russia’  reported on his Telegram channel that a car was blown up in the centre of Melitopol. “According to preliminary information, the car was blown up”, he wrote.

According to Rogov, due to the large force of the explosion, the car was torn into two parts. Law enforcement agencies and the Ministry of Emergency Situations were said to be working at the scene of the incident.

Further information about the victim and the amount of damage has been withheld, although numerous local social media users are suggesting the vehicle ‘belonged to a collaborator’. Other reports indicated the occupant could have been an SBU operative on his way to plant the bomb at a polling station.

In Melitopol 🇺🇦 a car was blown up 💥💨It is still unknown who was in the car… pic.twitter.com/rKUoXuZFsc

Rogov noted that one of the polling stations in Ivanovka had to be evacuated to a reserve building due to shelling. The precinct commission will continue to work there as usual, as well as in other sections of Energodar.

Prior to this, the regional publication Zaporizhzhya Vestnik also reported that an explosion had occurred in Berdyansk in the Zaporizhzhia region. Local authorities later confirmed that the explosion happened at the city’s administration building, as reported by gazeta.ru.