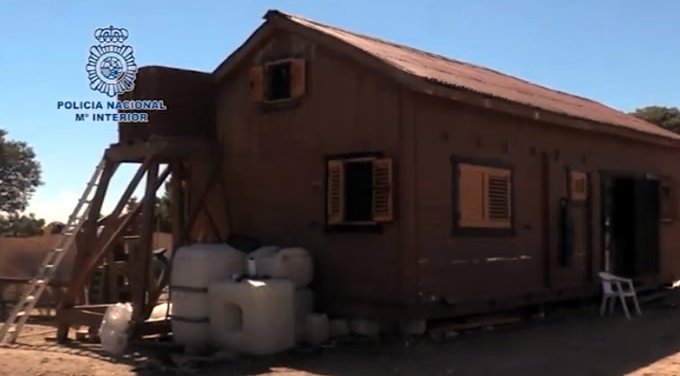 The first-ever cocaine laboratory with a similar design to those used by the South American drug cartels was discovered and destroyed by Spain’s National Police.

As reported in a statement on Saturday, September 24, National Police officers dismantled the first-ever clandestine cocaine production laboratory located in Spain to have a structure similar to those used by the South American cartels. It had the capacity to produce an incredible 120 kilos of drugs per week.

Twelve people were arrested as part of ‘Operation Silcon’, including the leader of the organization and his lieutenant. Ten searches were carried out in Malaga, Cordoba, and Madrid.

This intricate investigation was launched in May when the authorities detected the criminal organization. They established that the leader and his lieutenant of him-who lived in the province of Malaga-had a high lifestyle. Through third parties, they controlled companies that imported bags of cement in whose shipments they concealed a narcotic substance that fed a clandestine laboratory in Madrid.

The leader of the organization was quickly established to be a Spanish citizen, as were the rest of its members. Officers verified that these people were supplying themselves with a large quantity of chemical products, as well as all the necessary materials to be able to operate a laboratory.

A storage room in Cordoba was identified, where the gang stored solvents that were later transferred to a maritime container located in a car park on the Costa del Sol .

As the investigation progressed, it was possible to identify another Dominican citizen. He was seen as a trusted colleague of the leader who was directly in charge of supervising the drug manufacturing process in the laboratory and subsequently organizing its distribution.

This man was also known to have personally recruited three Colombian citizens who came to Spain expressly for the extraction of the narcotic substance. These people, known as ‘cooks’ are normally hired for a specific operation and are paid according to the number of kilos extracted, to later return to their country.

A villa in the Malaga municipality of Coin was also identified, which was initially where the laboratory was located, before being moved to the province of Madrid for security reasons. To facilitate the transfer of the narcotic substance, the members of the group put it in sacks with cement and took great security measures, such as the use of shuttle vehicles.

The destination of the bags was, initially, a car wash managed by members of the gang, and later a rural farm, both points located in towns near the capital.

Finally, police officers carried out the operation on September 6, including ten house searches – six in Malaga, three in Madrid, and one in Cordoba. They managed to destroy the whole organization. On this occasion, nine people were arrested, and three days later, another three.

Five ‘cooks’ were found in the process of extracting the drug when the Special Operations Group (GEO) entered the laboratory located in a town near Madrid. It was hidden on a large farm, protected only by umbrellas and tarpaulins in an attempt to camouflage the activity from any aerial patrol.

The National Police highlighted the lab’s similarity to those installed in the South American jungle and the method used to extract the cocaine base paste. This clearly reflected the great knowledge of the ‘cooks’ in this matter. Normally the organizations resort to the use of large quantities of chemical products, but the detainees used only gasoline, ammonia, and water for this process.

During the searches, officers seized a vehicle in which a pistol with six cartridges ready to use was found, as well as cash and documentation. A large number of chemical products, both liquid and solid, were seized in a container in a car park, waiting to be used for extraction in future operations.

In total, 85 kilos of cocaine base paste, 250 kilograms of cocaine-impregnated cement, 950 litres of chemical precursors, 125 kilos of solid precursors, six vehicles, and €36,000 were seized, as reported by lasprovincias.es.