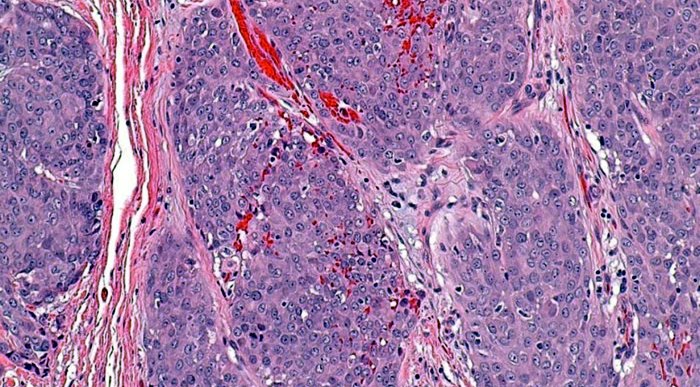 Image of a Carcinoma of the salivary gland. Credit: Nephron, CC BY-SA 4.0, via Wikimedia Commons

A ‘miracle’ herpes treatment has been proven to eradicate tumours in terminally-ill cancer patients in the UK.

As  new therapy developed by scientists at the Institute for Cancer Research in London has been proven successful in shrinking or even completely eradicating cancerous tumours. In early trials that were conducted on terminally-ill cancer patients in London’s Royal Marsden Hospital to assess the treatment’s safety, 25 per cent of them had a positive result.

💉 NEWS: A modified version of the herpes simplex virus, known as RP2, has shown early signs of effectiveness in a range of advanced cancers.

The researchers treated the patients with a genetically-engineered version of the herpes virus. It was found to rally the immune system while also shrinking or destroying cancerous cells in around one-quarter of the trials, as reported by the Institute of Cancer Research on Saturday, September 24.

“I was told there were no options left for me and I was receiving end-of-life care”, said 39-year-old Krzysztof Wojkowski. Since taking part in the 2020 trials he has been free of his cancer for two years despite originally being told that there were no further options available to treat his salivary gland tumour.

“I had injections every two weeks for five weeks which completely eradicated my cancer. I’ve been cancer-free for two years now, it’s a true miracle, there is no other word to describe it. I’ve been able to work as a builder again and spend time with my family, there’s nothing I can’t do”, he explained.

A total of 39 patients with varying types of cancer tumours took part in the trials with the revolutionary RP2 treatment. These included people with oesophageal, skin, and head and neck cancer who had all been told there was no further treatment available to cure them.

The genetically-engineered virus was injected directly into the tumour. It then multiplied inside the tumour, making the cells explode from within.

Another action that RP2 carries out is to produce molecules which boost the immune system’s desire to fight the cancerous cells. The body gains an extra chance of defeating the cancer as the virus blocks CTLA-4, a protein that lowers the immune system.

Many people carry the herpes simplex virus latently in their bodies anyway as it is a common infection. A pleasing find of the trials was that there were no side effects to RP2 that needed medical intervention. Mostly the patients suffered just common chills, fever, or fatigue.

“Viruses are one of humanity’s oldest enemies, as we have all seen over the pandemic. But our new research suggests we can exploit some of the features that make them challenging adversaries to infect and kill cancer cells”, commented Professor Kristian Helin, chief executive of The Institute of Cancer Research, London.

He added: “It’s a small study, but the initial findings are promising. I very much hope that as this research expands we see patients continue to benefit”.

“Our study shows that a genetically engineered, cancer-killing virus can deliver a one-two punch against tumours – directly destroying cancer cells from within while also calling in the immune system against them”, explained Kevin Harrington. He is a professor of biological cancer therapies at The Institute of Cancer Research, as well as the team leader.

He continued: “It is rare to see such good response rates in early-stage clinical trials, as their primary aim is to test treatment safety and they involve patients with very advanced cancers for whom current treatments have stopped working”.

“Our initial trial findings suggest that a genetically engineered form of the herpes virus could potentially become a new treatment option for some patients with advanced cancers – including those who haven’t responded to other forms of immunotherapy. I am keen to see if we continue to see benefits as we treat increased numbers of patients”, he concluded.