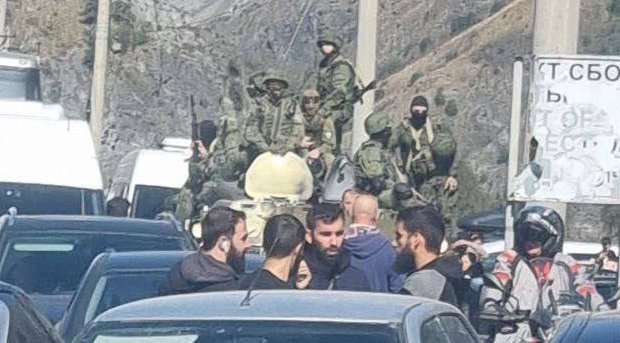 RUSSIA’S FSB has denied that a checkpoint is being set up at the Georgia border and stressed the military spotted onsite were just there to make sure Russians don’t leave the country without “completing any border formalities.”

The Russian Federal Security Service (FSB) has confirmed that Russian military personnel have been deployed to the Verkhniy Lars border crossing on the border with Georgia in case of a border breach, according to Russian media outlet RBC on Monday, September 26.

“An APC is moving there, but it is not moved there to set up a checkpoint. Roughly speaking, it is a reserve just in case the reservists want to break through the checkpoint and leave the country without any border formalities,” the FSB told the news outlet while stressing that the military has moved there “for this purpose only.”

Video footage shared online showed the Russian military arriving in droves and pictures showed the ‘checkpoint’ being set up.

Footage of a armoured russian vehicle passing a line of cars at the Russia-Georgia border pic.twitter.com/5O0HIqzfb9

Videos also show the large number of vehicles at the Georgia border.

“A queue of cars at the border with Georgia.❗Instead of fighting Putin’s regime, Russians are simply fleeing,” one account on Twitter wrote.

🚨 A queue of cars at the border with Georgia.
❗Instead of fighting Putin's regime, Russians are simply fleeing.#Russia #Russians #Georgia #UkraineRussiaWar#StopRussia #StopPutin #StandWithUkraine pic.twitter.com/4IJbGFBeXj

According to government statistics, the Georgian capital Tbilisi had already seen an influx of around 40,000 Russians since Moscow invaded Ukraine on February 24 and now that number appears to have increased since Putin announced partial mobilisation in Russia on Wednesday, September 21.

The news comes after video footage of huge queues of Russians at the Finnish, Georgian and Mongolian borders with Russia, allegedly fleeing mobilisation began to circulate online on Thursday, September 22.