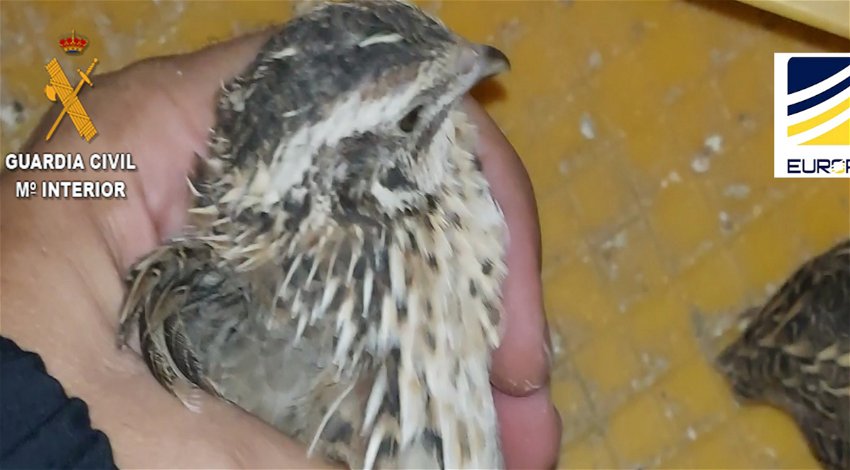 58 people responsible for macro-farms that bred quails for hunting grounds have been arrested and investigated by Spain’s Guardia Civil, as reported on Tuesday, September 27.

The arrests for the illegal breeding of exotic quails destined to hunting grounds in Spain were carried out by the Guardia Civil, under the coordination of the Public Prosecutor’s Office for the Environment and Urban Planning in the framework of Operation GUATLLA.

Actions have been carried out in several quail-producing companies, intermediaries and hunting grounds, carrying out more than 114 inspections during which SEPRONA agents took more than 300 biological samples in order to certify by means of DNA that they were dealing with the invasive species.

During the two-year operation, the marketing of specimens of the Japanese quail species (Coturnix japonica) by various companies has been demonstrated.

Although their breeding and marketing is permitted for sale for human consumption, it has been discovered that these companies had a parallel production line whose destination was the release and liberation in hunting grounds and intensive hunting grounds during hunting activities, an activity prohibited as it is an invasive exotic species.

During the period between January 2019 and September 2021 alone, it has been proven that more than 560,000 specimens of quail bred in the companies under investigation were marketed, the final destination of which was to be released into the wild for hunting purposes.

The native species of quail (Coturnix coturnix) is highly prized for hunting. However, the Japanese quail, a species marketed and distributed by these companies throughout Spain, is up to 10 times more productive and has very similar morphological characteristics, although they behave very differently in the environment, being heavier and less mobile and, therefore, easier to hunt.

The main quail-producing companies had a real R&D department in which they favoured the hybridisation of species so that they would not be detected by buyers, which could also be a fraud for consumers who believed that they were buying the national quail.

Release activities for hunting purposes, for which the birds were sold by the producing companies, meant that some of the Japanese quail specimens survived and, due to their conditions, adapted to the wild.

The Japanese quail (Coturnix japonica) is in direct competition with the common quail (Coturnix coturnix), a native species which is naturally distributed, and in serious decline, throughout Spain.

The result of the uncontrolled release and introduction of the Japanese quail is that natural hybridisation has been observed between the Japanese quail and the common quail, which could lead to the disappearance of the native species.

This introduction into the wild has an ecological impact, with the consequent loss of genetic heritage, as well as the competition generated with the native species which it displaces from the wild.

This is the first operation in which an activity related to the release of invasive alien species in which this competition between species takes place is investigated from a criminal point of view, an activity that has been carried out deliberately and over a prolonged period of time in recent years.

This operation has been coordinated by the Public Prosecutor’s Office for the Environment and Urban Planning of the Attorney General’s Office.

The proceedings have been delivered to the Courts of Instruction No. 1 of Lleida and No. 2 of Cervera (Lleida).

The agents have had the collaboration of the Provincial Prosecutor’s Office of Lleida and the National Veterinary Laboratory of the Ministry of Agriculture, Fisheries and Food for the analysis of the genetic samples, as well as the advice and support of inspectors from the General Directorate of Biodiversity of the Ministry of Ecological Transition and Demographic Challenge.

It is part of the Spanish Action Plan against Illegal Trafficking and International Poaching of Wild Species (TIFIES Plan), and of the LIFE GUARDIANS OF NATURE project.