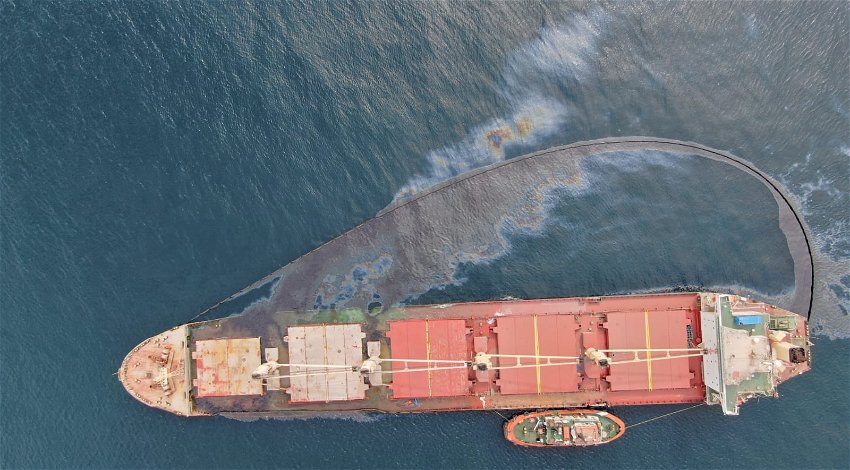 Image of the OS35 that sunk off the coast of Gibraltar. Credit: [email protected]

The Junta de Andalucia has lowered the Emergency Plan relating to the OS 35 spillage off the coast of Gibraltar from Level 1.

On Monday, September 26, the Junta de Andalucia lowered the Level 1 alert of the Emergency Plan for the Risk of Pollution of the Coast in Andalucia (Pecla). The alert had been put in place due to the spills that appeared last week in the eastern area of ​​La Linea and on the beach of El Rinconcillo de Algeciras from the sunken vessel, OS 35.

The ship remains sunk on the east side of Gibraltar, but the Pecla will now drop to the pre-emergency phase. During this phase, the situation will continue to be monitored to enable any new developments to be dealt with rapidly.

Last week, the cleaning tasks were completed on the Levante beach, in the areas of Santa Barbara, La Atunara, and El Fuerte. Microbeads of hydrocarbons and lubricating oils had washed up on these beaches, as well as on the El Rinconcillo beach, in Algeciras.

Cleaning workers from both municipalities, as well as members of the Infoca Plan, carried out cleaning tasks on the aforementioned beaches, especially in the area of ​​El Fuerte, where the greatest impact had been recorded. Containment barriers were also placed on the Palmones and Guadarranque rivers, which have already been removed.

Members of the Andalucian Emergency Group (GREA) have continued with reconnaissance tasks throughout the bay to detect possible new effects. The GREA even deployed an Advanced Command Post (PMA) from where the work carried out was coordinated, in direct communication with the 112 coordinating centres.

Since the first collision of the OS 35, GREA patrols, together with the National Police, Environmental Agents and the Environmental Pollution Unit of Algeciras (UCAM), have carried out surveillance tasks on 16 beaches along 24km of coastline to detect possible spills, as reported by europasur.es.