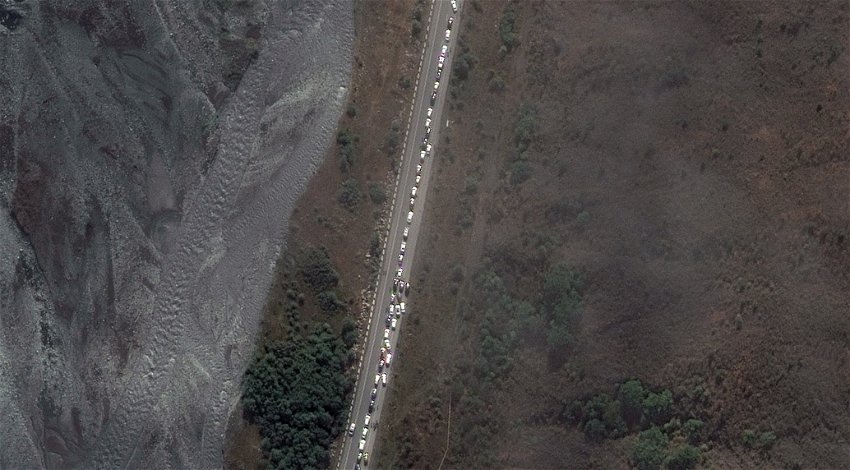 Satellite images show queues 10 miles long as Russians take to the air and to the streets in an effort to flee Russian President Vladimir Putin’s mobilisation call up.

The images released by Maxar Technologies on Tuesday, September 27 show long queues at the borders of Finland, Georgia and Mongolia.

According to Maxar, who has been tracking the conflict using its satellite network, the queues stretch as far back as 10 miles (16 kilometres), with people waiting up to 48 hours to cross the border.

#SatelliteImagery from September 25, 2022 shows a large traffic jam of vehicles leaving #Russia and attempting to cross the border into #Georgia, at the Lars checkpoint, following Russian President Putin’s mobilization order for the war in #Ukraine. pic.twitter.com/iHUsC8hYs2

The queues and the waiting times have been confirmed by Russian state media, however, there is still no sign from the Russian government that it will close its borders as it calls up 300,000 reservists. With the numbers fleeing in relative terms still small, the ministry of defence in Russia claims it has 2.5 million reservists.

According to authorities in the Georgian capital Tbilisi, around 40,000 Russians had made the journey since the invasion of Ukraine.

With Europe’s borders closed to the average Russian, calls are increasing from member countries to reopen access to those fleeing conscription. Germany is leading that call saying the bloc needs a European-wide solution.

But not everyone is convinced so for now the borders remain closed. Some like Lithuania believe that Russians should stay and rise up against Putin believing that fleeing won’t bring change. They also cite possible security risks for the bloc.

But some of those spoken to Sky News say: “We all understand that it is impossible to make any difference while you are in Russia, to make any good, because soon it will not even be possible to talk about what’s going on even in your own kitchen.

“All those protests which are held in Russia, they are dispersed. Russia is a police state ruled by tyrants, and they will have enough of the police officials, special armed forces, to disperse all citizens.

“If a large number of people takes the streets, they can easily use arms. They already tried those methods in Belarus and we know how it ended.

“The regime will not fall. The regime is strong. They will have enough resources to kill their own citizens. I don’t want to be neither witness nor a participant of these events.”

Whilst disagreement remains over access to Europe, queues 10 miles will continue to be seen at the borders of those countries that remain open. That is until Russia decides to restrict movement and that is always a possibility.