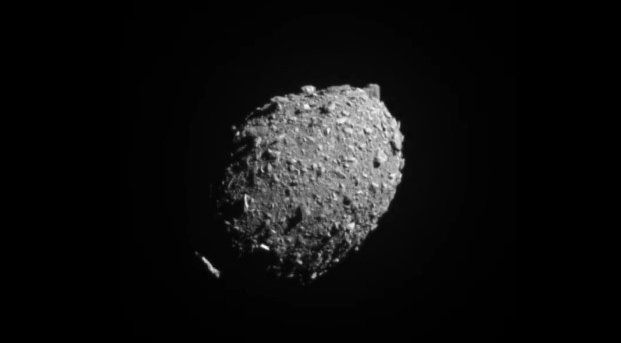 NASA scientists made space history by directing the DART space probe into a direct hit on the asteroid Dimorphos at 15,000mph.

History was made seconds after 7:14pm local time on Monday, September 26, when NASA successfully completed the first-ever planetary defence experiment. Travelling at a velocity of 15,000mph the DART spacecraft was directed precisely into a head-on impact with the asteroid Dimorphos.

At the moment of impact, the commentator on the live feed that was streamed on NASA’s YouTube channel was heard to exclaim: ‘Humanity 1 – Asteroid ‘. He also stated what an incredible achievement it was for mankind to have completed such an epic space mission.

Don't want to miss a thing? Watch the final moments from the #DARTMission on its collision course with asteroid Dimporphos. pic.twitter.com/2qbVMnqQrD

Precise results of this mission will not be collected until a future date. NASA scientists carried out what is known as a ‘kinetic impact’ test with the objective of altering the trajectory of the asteroid. Dimorphos of course posed no actual direct threat to Earth’s safety.

The idea was to determine whether such a mission could stop such a near-earth object from crashing into the Earth in the future and prevent any impending disaster.

Telescopes on Earth will monitor the asteroid for the next few weeks to calculate if the 525-ft Dimorphos’s orbit around its larger satellite Didymos has changed, and if so, by how much. It currently takes 11 hours and 55 minutes to orbit and NASA hopes the collision will have moved the rock into a smaller orbit.

During an interview last November when the probe was launched on its epic journey, NASA administrator Bill Nelson said that DART was: “Something of a replay of Bruce Willis’s movie, ‘Armageddon,’ although that was totally fictional”.

Today’s success makes up for the earlier upset of having to cancel the launch of the Artemis 1 space mission due to the imminent arrival in Florida of hurricane Ian. The rocket has been rolled back into its hangar awaiting a new launch date.

IMPACT SUCCESS! Watch from #DARTMIssion’s DRACO Camera, as the vending machine-sized spacecraft successfully collides with asteroid Dimorphos, which is the size of a football stadium and poses no threat to Earth. pic.twitter.com/7bXipPkjWD