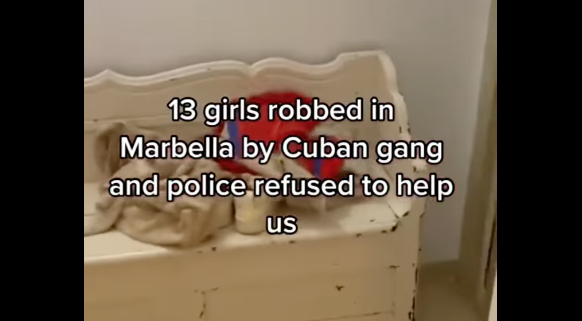 A VIDEO emerged on social media on Wednesday, September 28 accusing Spain’s Guardia Civil of insufficient action after 13 girls were robbed in Marbella.

The video appeared on the marbellasequeja2021 Instagram channel with the caption: “13 girls robbed in Marbella by Cuban gang and police refused to help us.”

Alongside the video, read the words: “We would like to alert everyone in the vicinity of the above-mentioned community of the criminal activity currently ongoing by a known international criminal gang. In Numbers 11 & 13 of Senoria de Calahonda, there are “squatters”. Who are continuously threatening the law-abiding community with violence WITH WEAPONS (Community has video and photo evidence).”

It continued: “Transferring stolen goods to many unsavoury persons who they are allowing entry into the community. Partying all night without any regard for community laws and rules. Many sounds of violence inside the properties.

“On Sunday 25th September – It came to a head when a number of girls holidaying in Marbella were robbed and to cut a very long story short they appeared at the community as all their devices that were robbed were showing their location as in these properties.

“The Guardia Civil appeared and didn’t do anything, despite all the girls’ belongings still showing their location as being inside the properties mentioned above.”

“The community residents are now living in fear of this criminal gang who are terrorising the community and very blatantly pursuing illegal activities in broad daylight. The ring leader illegally living in No 11 – Is a known Cuban criminal named Alexis Huerres, (See pictures). His name can be googled and you can see he is a convicted criminal who concentrates on burglaries, robbery and theft,” the post read.

“I’m sure any of the residents of the Senoria De Calahonda, Los Jarales Community would like the opportunity to speak about this to the media in order to get these people where they belong-BEHIND BARS !!!! PLEASE HELP THE COMMUNITY – FOR THE GOOD OF ALL LAW-ABIDING CITIZENS OF THIS REGION.”