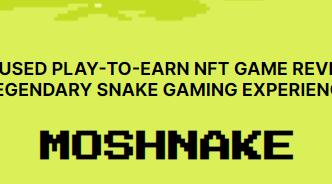 There are many ways to profit from cryptocurrencies. You can purchase and upsell it, mine cryptocurrencies or a lesser-known way to gain crypto-tokens is by playing games. As unreal as it may seem, Play-To-Earn games have been around since 2013 but only became popular four years later, in 2017. New project Moshnake (MSH) and older ones, such as The Sandbox (SAND) and Axie Infinity (AXS), have opened doors in the crypto universe by merging with gaming.

As a rule of thumb, most of the Play-To-Earn games work by using NFTs. Non-fungible tokens are unique records of information on a blockchain. These tokens can’t be exchanged at the same value even if they are of the same image. For example, a £1 coin will only ever be exchanged for a £1, but a print of the Mona Lisa isn’t worth the same money as the original piece of artwork. Anything can be made into an NFT, real-world items or digital items. Most P2E games utilise NFTs as a form of currency or to show ownership of a virtual space/item in the game. By doing so, people can sell or make NFTs for either crypto-tokens or real-world money. Making earning crypto easier for those inexperienced as it’s linked to gaming, something most people have come across.

The Sandbox (SANDBOX) is a virtual world that uses the Ethereum Blockchain. Players can create, own and profit whilst using this game. The game is built up of user-generated content (UGC), which allows players to secure their creations, turn them into NFTs and sell them on The Sandbox International Marketplace.

Axie Infinity (AXS) is a Play-To-Earn game inspired by the well-known game Pokemon. Players can purchase cute creature NFTs called Axies and pit them against each other in competitions to gain more resources or win smooth love potions (SLP). Players can also breed their Axies to create more special and powerful Axie NFTs worth more. The unique features of your Axies unlock abilities for Axies that vary across games. The origin version of the game allows players to have one free starter, Axie making it less likely for players new to crypto to lose out on money.

Moshnake is an in-the-works Play-To-Earn game based on the classic ’90s snake game with a twist! Battle Royale-style gaming. Moshnake (MSH) players will purchase their snake NFT to start the game. They can choose from these four types of NFT snake icons increasing in rarity; Mamba, Viper, Krait and Cobra. Before players can enter the battle royale, they must purchase tokens. There are two tokens used in the game:

After entering the battle royale, players will try to eat eggs with tokens inside and attack other players. The last five standing will be able to hide their winnings one by one until they either win or defeat. The winner can collect any leftover tokens.

This game is easy to use and doesn’t give any unfair advantages based on what you can purchase. Everyone who goes into the battle royale has an equal chance of winning, making it the PERFECT game for those new to cryptocurrency. These P2E games are an excellent way to start your crypto journey.