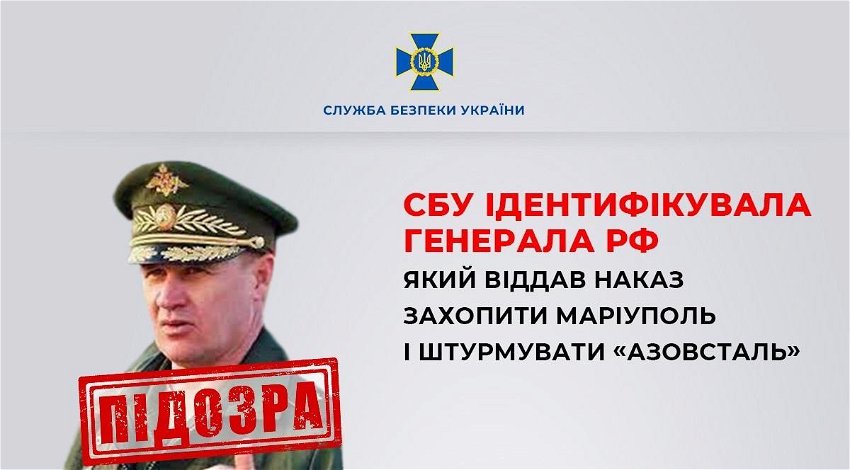 Ukraine’s Security Service (SBU) has reportedly identified the Russian general who gave the order to seize Mariupol and storm Azovstal, as reported on Thursday, September 29.

Ukraine’s SBU shared the news of the Russian general who gave the orders on Mariupol and Azovstal in a statement that read:

In the course of investigative and operative actions, the SBU identified a Russian serviceman who ordered to seize Ukrainian Mariupol and storm one of the largest industrial enterprises of the city – “Azovstal”.

The war criminal is the commander of the 8th Guards Combined Arms Army of the Southern Military District of the Russian Federation, Lieutenant General Andriy Mordvichev.

According to the investigation, since February 2022, he led the seizure of the territories of Donetsk region and personally participated in hostilities against the Armed Forces of Ukraine.

Mordvichev directly carried out military planning, coordination and management of these occupation units in combat operations.

Among other things, he gave the order to capture Mariupol district, where under his instructions Russian troops destroyed civilian and critical infrastructure and killed civilians.

While on the territory of the occupied part of Mariupol, Mordvichev held a meeting with Kadyrov, approving a plan for the final seizure of the city, blocking and further assault on Azovstal with the ruthless killing of Ukrainians who remained inside.

Under his direct command and control, the occupation troops committed atrocities against Ukrainian servicemen and civilians.

Currently, Lieutenant General of the Russian Armed Forces Andriy Mordvichev has been notified of suspicion under the following articles of the Criminal Code of Ukraine:

▪️ Part 3 of Art. 110 (encroachment on the territorial integrity and inviolability of Ukraine, if they led to the death of people and other grave consequences);
▪️ Part 2 of Art. 437 (waging aggressive war or aggressive military actions);
▪️ part 2 of Art. 28 (committing a criminal offense by a group of persons by prior conspiracy).

The news follows reports that the Russian commander of the Uragan multiple-launch rocket launcher has reportedly destroyed over 100 Ukrainian targets since the beginning of the war, as reported on Thursday, September 29.