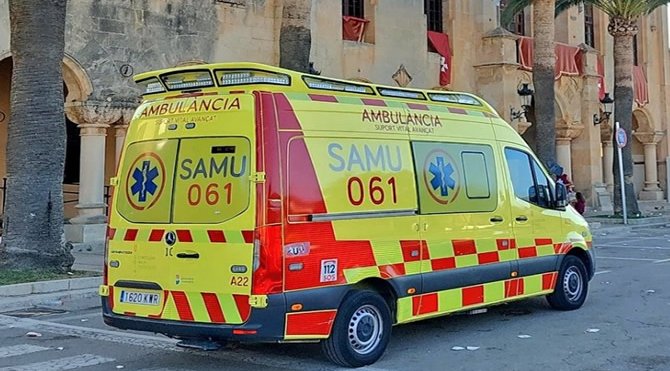 Four people were hospitalised in Valencia after a drunk and drugged driver crashed into a crowd of pedestrians who were crossing the road, with a baby reported to be in a serious condition.

As reported by Emergencias 112CV, four people have been seriously injured this afternoon, Friday, September 30, after a driver crashed into a crowd of pedestrians in the city of Valencia. A young baby and an adult male are reported to be in a serious condition. The baby’s mother and another male are said to have been injured.

The incident occurred at the intersection of Avenida Peris y Valero and Calle Maestro Aguilar. A car was allegedly driving erratically down the road and swerved across the central reservation, through the hedges, and onto a zebra crossing. He hit four people, of which two are a mother and her young baby that she was carrying in a pushchair.

According to the Local Police, the young baby is among the most seriously injured, as is the man. They said that the mother and another man have been slightly injured and had been transferred to a local health clinic.

Three teams from the Urgent Medical Assistance Service (SAMU) rushed to the scene to assist the victims. According to Las Provincias, the driver of the car tried to flee, but a member of the public prevented him from escaping by grabbing him by the neck and holding him until the arrival of the police.

A police spokesperson said that the car crossed the central reservation where a mother with a pushchair and two other adults were standing. As a result of the impact, the pedestrians were thrown into the other lane where another vehicle also hit them without being able to avoid them. The driver reportedly tested positive for alcohol and drugs, as reported by larazon.es.