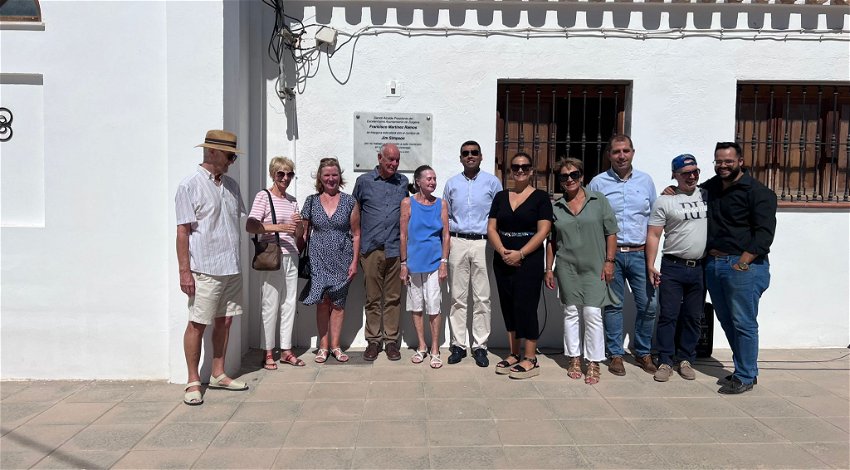 This is the town hall’s way of thanking Jim Simpson for his 16 years on the local council, including three as deputy mayor.

He explained that in 2004 he and his wife moved to Zurgena, where 1,000 of its 3,000 population are foreign residents. A year later, prompted by a spate of burglaries, he suggested forming a Neighbourhood Watch scheme, acting as area coordinator once the proposal was adopted.

“One day, in walked Zurgena’s mayor Candido Trabalon who said he wanted to talk to me.”

He soon found out.

“Would you run for councillor in the 2006 municipal elections?’” Candido wanted to know.

Initially reacting with resounding NO, Jim declared that he certainly didn’t want to get involved in local politics. Nevertheless, many expats were worried at that time by the planning permission scandals which put properties at risk of demolition.

“I realised that if I accepted, I would understand more about the situation and possibly be able to help,” he said.

After talking it over with his wife, Sue, Jim took up the offer and found himself on the local council, rising during successive elections to second position on the candidates’ list, which automatically made him deputy mayor.

By the time Jim was councillor responsible for Public Safety, Third Age and Non-Spanish residents, he worked each day from 10am until 2pm, never drawing a wage, nor wanting to.

“All the same, I was glad of my full-time interpreter Jose Manuel,” Jim told the Euro Weekly News.

Jim and Sue moved back to the UK in 2021 for family reasons but he agreed to continue working telematically until the 2023 elections.

On a recent visit to Zurgena, Jim was asked to attend a council meeting on September 27 where he learnt that one of the town’s plazas would bear his name.

“Next day, accompanied by the mayor and councillors, I visited Plaza de Los Llanos del Peral and saw that it was now called Plaza Jim Simpson,” Jim said.

“I have to say that it was one of the proudest days of my life and it moved me to tears,” he admitted.