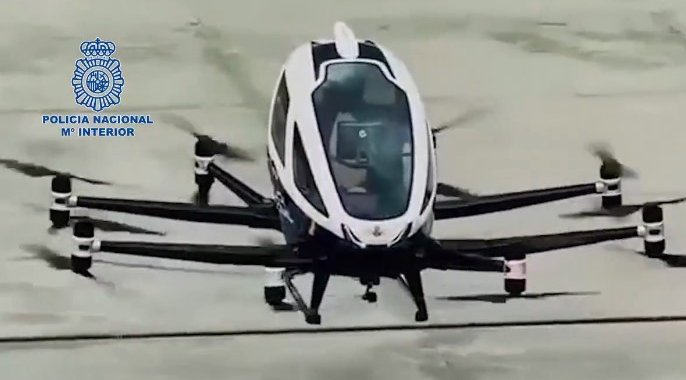 Spain’s national Police force has unveiled its new device, EH216, which they have christened the ‘Megadron’.

In a statement made today, Friday, September 30, by the Air Media Service of the National Police, the force announced the arrival of EH216, which they have christened ‘Megadron’. This nickname does justice to its size since it is by far the largest unmanned aircraft available to the State Security Forces.

The Megadron went through a testing period after its acquisition in 2021 and has now passed the tests, with the latest R&D&I tests and studies being concluded last week.

EH216 is made in China, by the firm EHang, weighs 600 kilos, is powered by electricity, and is capable of reaching 130kph in flight. The drone has the capacity to transport two people inside. Its maximum load is 220 kilos and this will be the first time it has been used in Europe by police forces.

Its use is being considered in those areas where a helicopter cannot reach due to lack of space. Although it is the largest police drone, it is at the same time a very small aircraft with a 5.6-metre wingspan and standing 1.85m tall.

Among the most intelligent applications that this model has been chosen for, the Police have investigated the possibility of its use for probable access to an area contaminated by some type of NRBC incident These are acronyms for known weapons or events caused by nuclear, radiological, biological, or chemical agents.

There are other possible uses that the Police have also explored. The manufacturing company markets the EH216 thinking of its use above all for the autonomous transport of people. Since the machine is capable of combining flight with other of its characteristics, it helps to avoid the possibility of accidents, as reported by laopiniondemalaga.es.