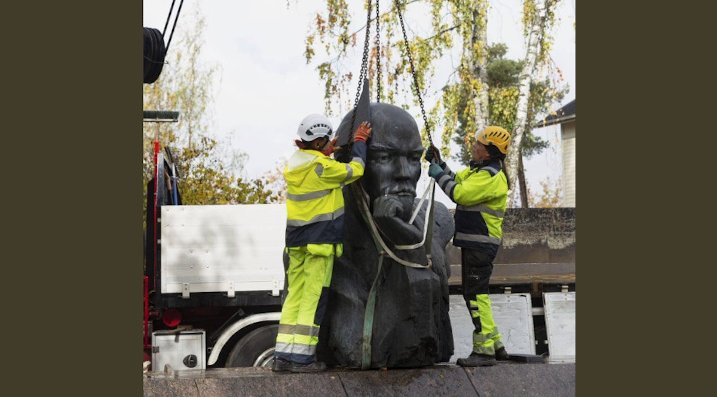 THE last statue of Vladimir Lenin in Finland has been removed from Kotka on Tuesday, October 4.

Finland’s last public statue of Russian dictator Vladimir Lenin has been removed from the city of Kotka and has now been moved to a storage facility.

Plans to move the last Lenin statue in Finland to a museum followed a newspaper poll and a 41-9 vote by the Kotka City Council on June 13.

According to Finnish media outlet Yle , the statue now belongs to the art collection of the City of Kotka, and its subsequent use will be decided by the Kymenlaakso Museum.

“In Finland, the last remaining Lenin monument is dismantled. It had been installed in 1979 in the town of Kotka,” one Twitter captioned the video.

“Everyone is taking the opportunity to erase history and rewrite it in their own way,” they added.

The statue of Lenin, sculpted by Estonian artist Matti Varik, was a gift in 1979 from Kotka’s twin city of Tallinn, which at the time was still part of the Soviet Union.

Kirsi Niku, Museum Director of the Kymenlaakso Museum, told Yle that the museum thinks the statue would have looked good in its own place.

“Although this generation will not see it, future generations will certainly be interested in it. It is history in its own time,” Niku said.

“The statue’s home is now in the Kymenlaakso Museum’s storage facilities, where other sculptures are kept.”

“The museum plans to consider a further use for the statue, but no one knows the timetable,” Niku said, stating that it could take years to make further plans.