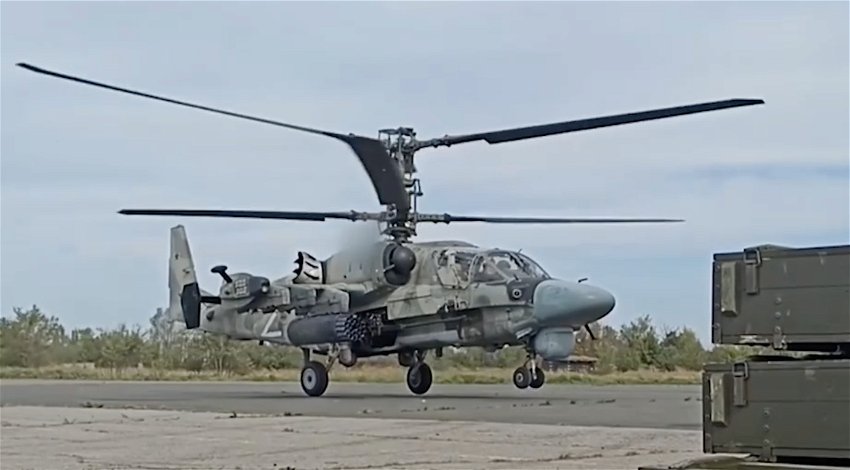 THE Russian Ministry of Defence has shared footage of a Ka-52 attack helicopter during combat in Ukraine.

The video, which was published on the Russian Ministry of Defence’s official Telegram channel and RuTube channel, shows a Ka-52 attack helicopter being inspected, rocket launchers being loaded, then taking off, flying and firing on a target.

“Four guided missiles were fired and the targets were hit. They are tanks, enemy SAU, also manpower and APCs,” said navigator Eugene.

“The rockets land precisely on coordinates, precisely on the target, covering a circle with a radius of about a hectare of land,” he said.

On Tuesday, September 6, Ukraine’s Armed Forces revealed that it had destroyed a Russian Ka-52 helicopter, a Russian Su-25 aircraft and five cruise missiles.

Posted to the official Facebook page of by the General Staff of the Armed Forces of Ukraine, a statement read at the time: “In general, the air defence units of our troops destroyed: a Su-25 aircraft, a Ka-52 helicopter, an unmanned aerial vehicle (UAV) and five X-101 cruise missiles.”

Prior to that, a Ukrainian Paratrooper shot down a Russian Ka-52 “Alligator” attack helicopter.

Speaking on the destruction of the Russian Ka-52 helicopter the Ukrainian Paratrooper, named “Nazar” said on Thursday, June 23:

“On that day, our crew went on combat duty. Around eight o’clock in the morning, three enemy Ka-52 helicopters appeared in the sky from the enemy side.”

“Apparently, they were conducting air reconnaissance. As the helicopters approached, I aimed my man-portable air defence system “Igla” at the target and launched it.”

“The missile hit the helicopter! Black smoke fell out of the downed helicopter,” stated Nazar, the anti-aircraft gunner.

Nazar also added that he dedicated the destruction Russian helicopter to his child, who recently turned one month old.