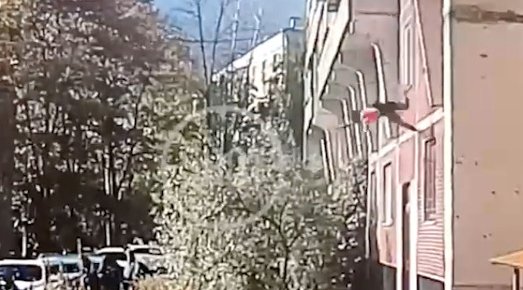 VIDEOS circulating on social media show the shocking moment the lieutenant colonel of the Moscow Federal Penitentiary Service falls face-first out of the window of her flat.

Polina R, who works as the head of the Information Security Department at the Moscow Moscow Federal Penitentiary Service, fell out of the window of her rented flat, as reported on Wednesday, October 6.

The 36-year-old, who was at home with her husband and two-year-old daughter at the time, can be seen falling face-first out of the window on the 4th floor of her house on Bolshaya Naberezhnaya street in the Russian capital of Moscow.

According to eyewitnesses, immediately after the incident, the husband ran to his wife.

When police officers arrived at the scene, officers found the family flat in complete chaos, as reported by SHOT.

Officers reported that the conditions were not suitable for a young child and the girl was subsequently taken away.

The Russian media outlet reported that Polina’s husband owns a business related to the production of glass.

The incident reportedly came as shock as there had been previous reports against the family.

However, one of the lieutenant colonel’s neighbours said that she had been behaving inappropriately lately, throwing foul-mouthed tantrums in the street a couple of times, according to the media outlet.

She had reportedly been shouting more and more inside the flat in recent weeks.

As a result of the horrific incident, Polina suffered multiple injuries.

The news comes after Pavel Pchelnikov, the head of the PR service of Russian Railways subsidiary Digital Logistics LLC, was found dead on his balcony in Moscow.

The 52-year-old was found dead at 6:30 am on Wednesday, September 28 on the balcony of his flat on the Kolomenskaya embankment of the Russian capital of Moscow.

Initial reports suggest that Pchelnikov committed suicide after he was found with a gunshot wound.

On Wednesday, October 5, the former head of the All-Russian State University of Cinematography reportedly ‘committed suicide’ in Moscow.