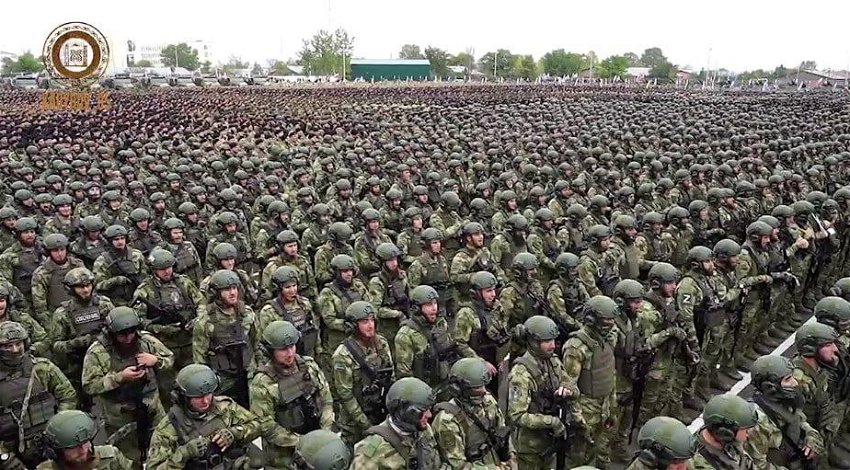 Chechen leader Ramzan Kadyrov revealed that “more than 20,000 elite fighters” were in Chechnya to pay their respect to Russian President Vladimir Putin on his 70th birthday.

“We started today’s significant day with a solemn formation of the power units of the Chechen Republic,” he wrote on his Telegram channel.

“The event was dedicated to the 70th anniversary of the President of Russia, Supreme Commander Vladimir Putin. More than 20,000 elite fighters lined up on the parade ground to support the course of the head of state and congratulate him on his anniversary.”

He added: “I warmly greeted these worthy sons of the Chechen people, who are ready at any moment to defend the Motherland and fulfil any order of our outstanding leader.

“With a single voice of twenty thousand, we congratulated Vladimir Putin on his birthday, securing this moment with our glorious battle cry: ‘AKHMAT-POWER!’

“The truth is behind us, which means that we will be even stronger and will certainly win! Long live Russia! Long live our national leader Vladimir Vladimirovich Putin!”

In Khankala (Chechnya), 20,000 men gathered to wish Vladimir Putin a happy birthday. At the same time, they declared that they were ready to go to the front if an order was received. pic.twitter.com/Mfr0xgeGqf

Speaking via Instagram stories, Seagal said on Friday, October 7: “I’ve just realised that today is a very important day. Today is President Putin’s birthday and I think that we are now living in very trying times.

He added: “And I’m really hoping and praying that he gets the support and the love and the respect that he needs.

“And that all the tribulations going on now will be over soon and we will be living in a world of peace.”

Kadyrov recently shared a video of his ‘underage’ sons training with guns as they get ready to fight in Ukraine.