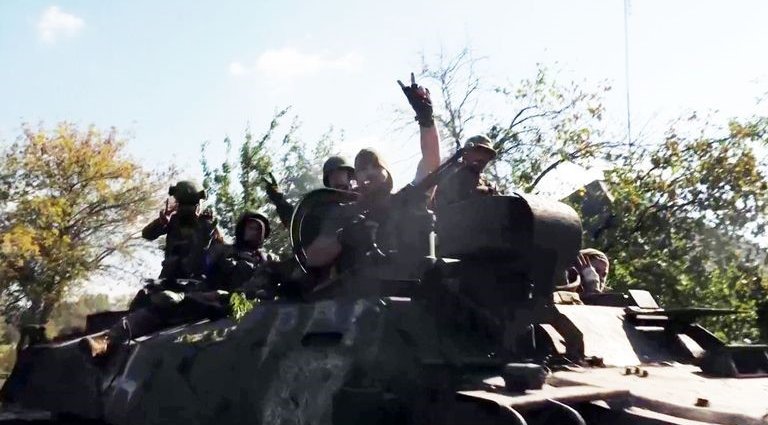 No time to collect the enemy’s dead is the account of an eyewitness report by Sky News on Saturday, October 8.

According to the report Ukrainian troops are in a race to recapture as much territory as possible before the winter sets in, and with the body count rising there just isn’t to collect the enemy’s dead.

The number of dead is said to be shocking with masses of Russian corpses left in the wake of the counter-offensive, which has been described as “fast and methodical.”

While Putin and the Kremlin continue to hold the line of successes in Ukraine, the Sky News eyewitness report tells a different story.

According to their reporters, there are many burnt-out military vehicles suggesting ambush after ambush in what would appear to have been heated battles. Ukraine forces are said to be pushing Russian forces back, but as they retreat they run into more Ukraine forces who simply “take them out.”

There are also many casualties with the area said to be littered with Russian bodies as the Ukrainian troops move towards the city of Kreminna. That will open the gateway for them into Luhansk and the entire region, and leave them poised to reclaim the twin cities of Lysychansk and Severodonetsk.

Visiting the area against the backdrop of rockets, jets and bombs, Sky’s reporters say they saw many Ukrainian soldiers heavily laden with ammunition heading towards the front.

Buoyed by their successes, those troops are quick to display their belief that Ukraine will soon be liberated.

But as much as they see the smiles and the joy of Ukrainians they also witnessed the worst of war, dead soldiers whose families possibly don’t even know how they died or where let alone that they have died.

Locals have taken to burying the dead in a bid to keep disease away, as they do to keep the rats and birds from feeding on the corpses. Grief-stricken by the war, the dead but also overjoyed to see the Ukrainian army, the locals are finding life on the front line hard going.

There being no time to collect the enemy’s dead, local residents are doing what they can to clean up and treat the bodies of the enemy with respect.