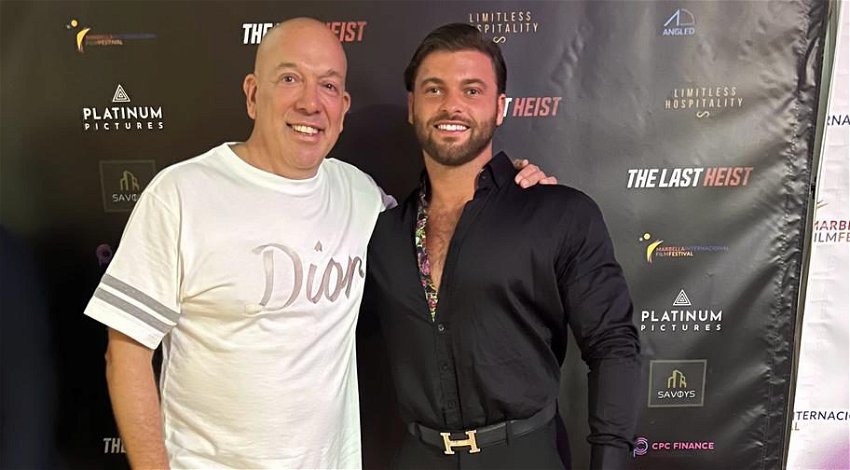 TERRY STONE, Love Island’s Jake Cornish, and the stars of The Last Heist were out on force for the film’s world premiere at Red Dog Cinema in Marbella on Friday, October 7.

Hundreds of locals and film fans from the UK also flocked to the cinema to watch the latest Terry Stone gangster classic.
Written by Michael Head and Lucinda Royden and directed by Coz Greenop, the film stars Michael Head, Terry Stone and Daniel O’Reilly, Rachel Warren, and Emily Wyatt, the film is based on the real life story of Head’s grandfather.
Full of dark comedy, some beautiful shots of London and a surprising twist, The Last Heist puts a new spin on the gangster genre with a philosophical look at the men behind the villainy, taking in themes of depression, domestic abuse, and the the importance of family.
Originally a West End play, Time, The Last Heist translates well to the big screen, making this likely to be a hit when it releases in the UK on November 17.
Writer and star Michael Head told the Euro Weekly News: “It’s all based on my life and true stories.
“I turned it into a West End play and we sold it out.  Then during Covid Daniel O’Reilly came to me and said he wanted to turn it into a film, and a few days later Terry Stone announced he was going to be in it.  It’s surreal.
“I wanted to write something that would make people laugh.  The best way to survive prison is to make people laugh and I grew up around that.
“I also wanted to create something with a bit of heart. My grandad, who the film is based, on wasn’t a bad man. He did what he had to do to survive.  I’m not glorifying gangsters or villainy but they are people.”
One of the film’s main actors, Daniel O’Reilly (comedian Dapper Laughs), added: “I think people will be surprised with this film.  They’ll think it’s along the lines of normal gangster films but I was given the opportunity to prove my acting in a West End play with Michael head and all the stories in this film are about his family.
“I had to prove myself in the West End play doing serious acting and then I raised the money and turned it into a film.  It looks like it’s working.”
“The whole theme behind it is behind humanising people who do stuff wrong.”
Terry Stone himself explained: “We made the film in lockdown so it was one of the good things that came out of Covid.  It was originally a play that we developed into a film.
“It reminded me of a cross between Reservoir Dogs and the Sixth Sense when I first read it.”
Read the EWN’s full exclusive interview with Terry Stone here.