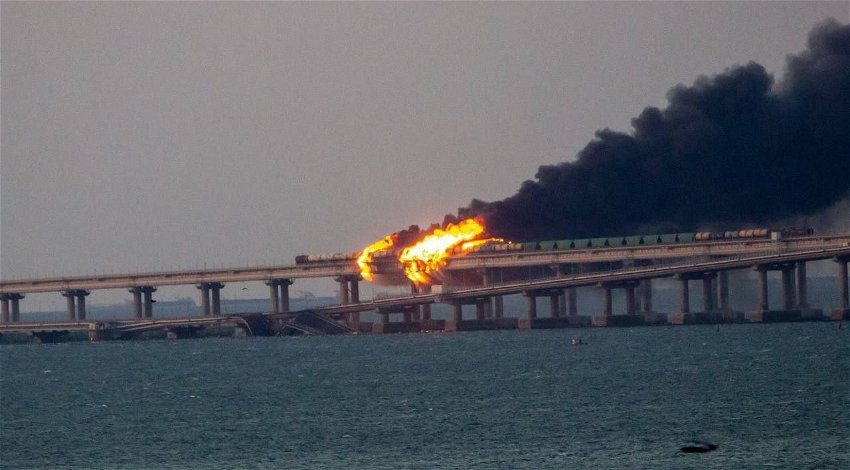 UKRAINE has taken the opportunity to mock Russia following the explosion that destroyed parts of the Crimean Bridge on Saturday, October 8.

UPDATE 10.12 am (October 8) – Ukraine’s Ministry of Defence has mocked Russia following the lorry explosion on the Crimean Bridge this morning – comparing the Kerch Bridge explosion to the sinking of Russia’s flagship missile cruiser Moskva.

“The guided-missile cruiser Moskva and the Kerch Bridge – two notorious symbols of russian power in Ukrainian Crimea – have gone down,” they said on Twitter.

“What’s next in line, Russkies?”

The guided missile cruiser Moskva and the Kerch Bridge – two notorious symbols of russian power in Ukrainian Crimea – have gone down.
What’s next in line, russkies?

A top Pentagon official claimed on Friday, April 15, that two Ukrainian missiles sank the Russian flagship missile cruiser Moskva, contrary to reports from Russia who claimed the vessel sank while being towed to port.

UPDATE 8.37 am (October 8) – Russia’s National Anti-Terrorism Committee claims that it was a truck that exploded on Russia’s Crimean Bridge which led to the ignition of seven fuel tanks and the partial collapse of two spans of the bridge. The head of Crimea’s parliament blames Ukraine for the explosion.

Russian news agency TASS said that the explosion on Russia’s Crimean Bridge was the result of “a lorry being blown up on the Crimean bridge,” according to Russia’s National Anti-Terrorism Committee (NAC).

“Today at 06:07, a truck exploded on the automobile part of the Crimean bridge from the side of the Taman Peninsula, which resulted in the ignition of seven fuel tanks of the train, following in the direction of the Crimean Peninsula,” NAC said.

“There was a partial collapse of two automobile spans bridge. The arch over the navigable part of the bridge is not damaged.

“At the scene, measures are being taken to establish the circumstances of the explosion and eliminate its consequences.”

The head of Crimea’s parliament, Vladimir Konstantinov, said that the explosion was the result of “Ukraine Vandals”.

⚡️ The roadway on the Crimean Bridge was damaged by "Ukrainian vandals", says the so-called "head of the parliament" of the temporarily occupied Crimea, Vladimir Konstantinov.

Footage and images show that the fire is still not under control as the Crimean Bridge rail span continues to burn.

⚡️ The moment of explosion on the Crimean bridge.

Video footage and photographs have captured the moment part of Russia’s Crimean Bridge caught fire and collapsed after a fuel tank exploded.

According to Crimea Railway, a Russian state unitary enterprise, a fuel tank exploded at the tail of a freight train crossing over the bridge.

“The equipment showed false occupancy on the railway tracks at the railway part of the Kerch Strait crossing. A fuel tanker in the tail of the goods train caught fire. The locomotive with part of the cars has been withdrawn to Kerch station,” it added.

A car park with water and toilets has been set up in Kerch for vehicles unable to drive to the Crimean bridge, authorities said.

Managing editor of Meduza, Kevin Rothrock, shared images and videos of the event on social media, which have been shared thousands of times on Twitter.

Other footage shows the blaze from different angles.

As a result of the incident on the Crimean bridge, the roadbed was damaged. pic.twitter.com/NNwDRTGZzy

This one was shared with the caption: “🔥 The Russian soldier/cop is talking on his cellphone and says “Alla and Anatoli, I’m running a little late. Well, in short: the bridge is on fire.” 🔥”

🔥 The Russian soldier/cop is talking on his cellphone and says “Alla and Anatoli, I'm running a little late. Well, in short: the bridge is on fire.” 🔥 pic.twitter.com/9jYWdwvzFw

“Crimea is provided with a supply of food and fuel,” Oleg Kryuchkov, adviser to the head of Crimea, said.

“The ferry crossing is ready for launch. All logistics schemes in case of emergency have been worked out,” Kryuchkov said.

As a result of the blaze, “car traffic on the Crimean bridge has been suspended,” as reported to TASS by the press service of the FKU “Department of Highways”.

“Traffic at the transport crossing through the Kerch Strait has been temporarily suspended, employees of the Ministry of Emergency Situations and the road service are working on the spot,” said a representative of the department.

The fire is currently being contained, according to Russian media outlets.

Back on Wednesday, July 6, it was reported that Russia feared an attack on the Crimean Bridge from Ukraine and desperately tried to use decoy tactics to draw attention away from it.

The previous week, videos of billowing smoke rolling across the Crimean Bridge (also known as the Kerch Strait Bridge) were the apparent result of a Russian smokescreen exercise, while images and videos making the rounds on July 6 showed a barge full of mirrored reflectors in the waters nearby.

A video showing the barge at the time noted: “Not entirely sure what we’re looking at here, but it seems a barge full of mirrored reflectors is being moved to sit in the middle of the Kerch Strait Bridge. Seems Russian fears of an attack on this bridge are growing by the day…”