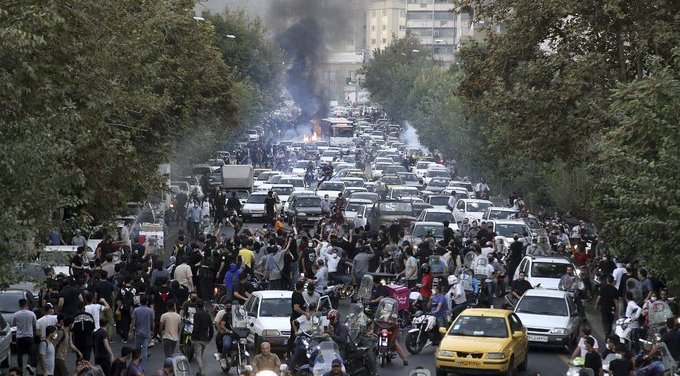 19:25 (October 9) – Iran’s death toll has continued to rise as security forces and citizens clash in ongoing protests against the hardline government.

According to the Norway-based Iran Human Rights Group, the death toll has reached at least 185. Included in those that have died are 19 children and at least 20 members of the security forces.

Despite a crackdown by police and the increased use of force the protests have shown no signs of abating, with anger growing daily over the manner in which the government has handled the death of 22-year-old Mahsa Aminii and the subsequent protests.

The hardline government have stepped up efforts to bring the protests down, which sources say has been the wrong tactic. Rather than deal with the underlying reasons for the protests, the government and religious leaders have worked to enforce the stringent dress codes that determine how women in the country are expected to follow.

Reports of the use of live rounds of fire continue to filter through, as do those of women breaking the law in a show of anger at the government.

When the police join the protesters, that’s usually not a good sign for the dictatorship. Hopefully the uprising in Iran will work this time. https://t.co/7ijZm1Uw95

19:21 (September 26). Iran’s death toll is nearing 50 as the security services continue their attempts to crack down on protestors, who take to the streets following the death of Mahsa Aminii.

Aminii was arrested by the so-called morality police for wearing her veil incorrectly, only to die in their custody. Those protests have become a symbol of the desire for more freedom and a move away from the strict Muslim requirement that restricts what women can wear in public.

Government efforts to quell the riots seem to be paying off as they have in the past when force was used. That coupled with internet and mobile restrictions has made it more difficult for organisers to “gather the troops,” as has the arrest of many journalists.

Mobile networks are being cut in the afternoon and evenings and the Internet is suffering intermittent blackouts.

Iran does not report the number of deaths, injuries or detentions, however, the group Iran Human Rights (IHR), based in Norway, suggests the death toll is nearing 60. But that number is difficult to verify in a country that is pretty much shut off from the western world.

An indication of the extent of the arrests has been given by the Prosecutor of the city of Sari, Mohamad Karimí, who reported on Sunday that 450 “troublemakers” in the northern province of Mazandarán had been arrested. But that is just one of more than 15 towns and cities that have seen protests.

The Committee to Protect Journalists has reported the arrest of at least 18 journalists in recent days prompting the High Representative of the Union for Foreign Affairs, Josep Borrell, saying: “The widespread and disproportionate use of force against non-violent protesters is unjustifiable and unacceptable.”

He added that the Internet restrictions are a “flagrant violation of freedom of expression.

“A growing body of information indicates that, despite repeated calls for restraint, the response of the Iranian security and police forces to the demonstrations has been disproportionate and has led to loss of life and a large number of injuries,” said the high representative. “The European Union will continue to explore all options available to it before the next Foreign Affairs Council, to address the murder of Mahsa Amini and the way in which the Iranian security forces have responded to the subsequent demonstrations.”

The pro-government rallies called for an end to the protests with some calling for the execution of those involved. As with past demonstrations against the government the army has threatened to step and in to bring the organisers to “justice.”

That could see the demonstrations and the open defiance of clerics and the morality police come to an end, but posts by locals say this time feels different with the extent of feeling far deeper than during previous riots.

12:50 (September 24) – Human Rights Watch has accused the Iranian government of detaining journalists in an effort to stop coverage of the increasing number and size of protests that are sweeping the country.

Attempts have been made by the leadership to shut down access to social media sites without success and now they are targeting journalists as they seek to hide what is happening in the country. But the news is getting out and the anger within the country is growing in scenes reminiscent of the deposal of the Shah.

Iranian regime is arresting journalists faster than ever. It’s another effort to hide the truth https://t.co/3z7ajmPcqG

12:20 (September 24) – At least 35 people have died during protests against the Iranian regime following the death of Mahsa Aminii (21) in police custody.

Posts online show many scenes of women abandoning the restrictive headdress and clothing that they are ordered to wear by the clerical rulers in a show of absolute defiance. Ordinarily, such displays would be dealt with swiftly by the so-called morality police, but as they are the target of investigations into the young woman’s death and the ensuing protests they have all but disappeared from the streets.

Despite attempts to crack down on protestors, the number of cities, towns and villages affected has grown to almost 100. Statues of leaders are being toppled and burned in scenes reminiscent of the Arab Spring some years back, and police stations and vehicles are being targeted in increasingly violent attacks.

Courageous protestors in Iran have taken control of the city of Oshnavieh, chanting “Freedom” and “Death to the Dictator.”
Please be the voice of Iranian people. #MahsaAmini #IranProtests2022 #IranRevolution #مهسا_امینی pic.twitter.com/i8ih5wui2f

Although Iran’s President Ebrahim Raisi has said that the case will be investigated, this has done little to quell the riots or the level of anger towards the government and the police.

What makes this uprising different is that in a world where women are treated as second-class citizens, men are taking to the street in support of those protesting Aminii’s death. At the same time, women are throwing caution to the wind and are discarding traditional wear and openly flaunting their “newfound freedom.”

That open defiance is spilling over into everyday life with women and men increasingly defying clerics and chasing them away, accusing them of having no morals.

The news that at least 35 people have died in the protest will only add fuel to the situation, which at this time shows no sign of abating. How long and how far protestors are prepared to go is the question on everyone’s lips, as it is what the international pariah government is prepared to do to hang on to power.

Thank you for taking the time to read this article, do remember to come back and check The Euro Weekly News website for all your up-to-date local and international news stories and remember, you can also follow us on Facebook and Instagram.€82.4