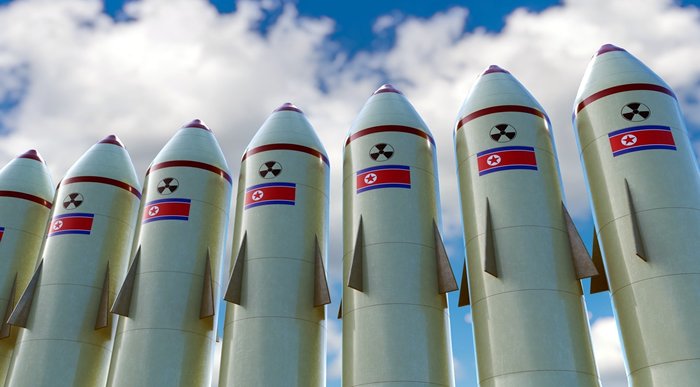 North Korea launched another two unidentified missiles in the direction of Japan in the early hours of today, Sunday, October 9. It is suspected, though not confirmed, that both were ballistic missiles. The Japanese Ministry of Defence is said to be analysing data to establish whether they could have been submarine-launched weapons.

Toshiro Ino, the Japanese State Minister for Defence said that both projectiles had flown a distance of about 350km (approx 217 miles). The first missile was launched at around 1:47am local time, with the second one fired six minutes later. They flew at around 100kph at their maximum altitude they added.

The rockets are thought to have come down in the East Sea/Sea of Japan, outside Japan’s exclusive economic zone (EEZ). This area extends 200 nautical miles (370km) from the country’s coastline. These are the waters currently being patrolled by the SS Ronald Reagan aircraft carrier strike group, and are close to South Korea’s eastern waters.

“This is the seventh time in a short period of time since the end of September that North Korea has escalated its provocations. This series of actions by North Korea threatens the peace and security of our country, the region, and the international community, and is absolutely unacceptable”, said Ino.

Emergency sirens were heard in Japanese cites with the South Korean military also confirming the two launches. Television screens across the country had their transmissions interrupted when the NHK TV channel switched to broadcast a speech from Kim Jong-un, the North Korea/DPRK Supreme Leader as he spoke about the previous missile launches.

South Korea’s Joint Chiefs of Staff told reporters today that the projectiles were probably short-range ballistic missiles. They were located as being launched from the Munchon area in Gangwon province of North Korea, according to edition.cnn.com.

These latest launches have been described by authorities in Seoul as: ‘an act of significant provocation’, and a ‘clear breach’ of the United Nations Security Council resolutions, as reported by japantimes.co.jp.