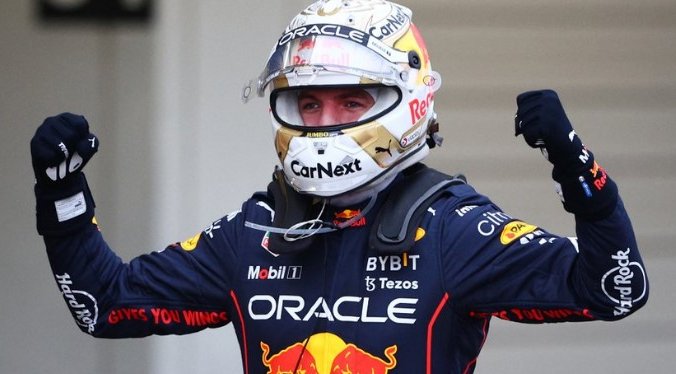 Max Verstappen has been crowned F1 world champion for the second consecutive season.

His crown was not immediately guaranteed after the race ended as there was confusion over the actual length of time the drivers had spent racing due to the rain causing a shortened race of just over half-distance. This left doubt as to whether the FIA would award the drivers full points or not. It was later clarified that reduced points would only have applied in the event of the race being suspended.

The team principals were all expecting at the most, three-quarter points to be given. The difference in point reduction would have left Verstappen still short of the title. When informed that he had just become champion again, a bemused Verstappen even asked: “Are you sure?”. He now heads to the USA Grand Prix with his second world title safely in the bag.

During the podium interview with the former British F1 star Johnny Herbert, upon being told that his title was confirmed, Verstappen said: “It’s crazy, very mixed emotions. Winning the championship, what a year we’ve had. It’s incredible!”.

“I’m so thankful to everyone who’s been contributing to the success, the whole team has been working flat out. Besides that, the work we did with Honda every year, constantly improving, gets very emotional, especially here. I’m very proud we could do it here”, he continued.

“The first is more emotional but the second is more beautiful. We’re leading the constructors so we want to focus on that, to secure that”, the world champion concluded.

Sergio Perez completed a one-two podium for Red Bull. Charles LeClerc had finished second in the Ferrari but was penalised for an error on the final lap which resulted in Perez moving up a position, as reported by bbc.com.